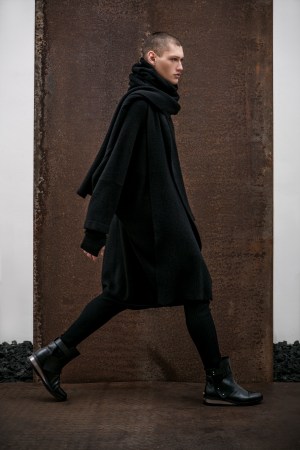 Ahmed Abdelrahman took his label Thamanyah to a new level for fall, introducing elements such as accessories, shoes and women’s wear, plus new silhouettes and fabrics.

This was more of an evolution than a revolution, with the line’s inspiration still steeped in traditional eastern dress.

“The women’s collection came so easily,” explained Abdelrahman, adding that from the brand’s beginning most of its styles were unisex and had a healthy female following.

Leather footwear — with four models for men and two for women — took a cue from Bedouin socks, while accessories — including necklaces in brass with palladium finish — are a mash-up of rosary and army-knife motifs.

Other firsts this season were the use of Japanese textile, such as tweed, leather embellishments, a reduced color palette — gray, black and white — as well as an amped-up casualwear quotient. (Altogether there were about 35 percent more pieces than in the past.)

Abdelrahman expressed a sense of honesty and freedom in this collection, which incorporated larger volumes, and the new spirit successfully — and palpably — infused the clothes.