The designer proposed a virile wardrobe based on martial arts uniforms. 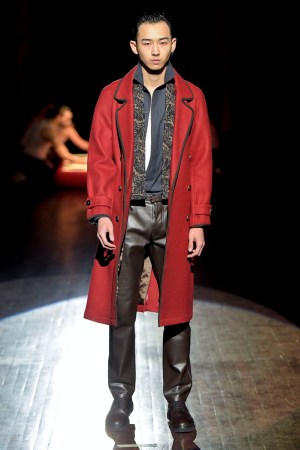 There was a great deal of testosterone in the room at Umit Benan’s Yakuza-inspired collection. The designer made his thuggish-looking, street-cast models perform nyotaimori — the ancient Japanese practice of eating sushi off a naked woman’s body — on a runway lit red, while another clique of beefcake characters briskly marched past them in a virile wardrobe based on martial arts uniforms.

“I’ve been to Japan some 16 times last year — it’s my biggest market,” Benan said about the origins of his “Tokyo Diaries” collection. The trip entailed nights of barhopping in the city’s Golden Gai district, but also reminded the designer of the Jean-Claude Van Damme and “Karate Kid” movies he watched in his childhood.

Despite the menacing setting, the clothes felt surprisingly casual and easy. The show opened with a red woolen trench with a sewn-in second lapel in quilted Japanese jacquard, which made it look as if the guy had just thrown the coat on top of his karategi after practice. A shearling leather jacket came over a pair of cropped, roomy judo pants, while other bottoms were either cinched at the high waist, or carrot-shaped in shiny blue corduroy, reflecting the glitz of Golden Gai’s neon lights.

With Benan looking to attract “the younger kids in the street,” the combat sport elements may do the trick.