What's the opposite of camouflage? Bobby Abley clothing. 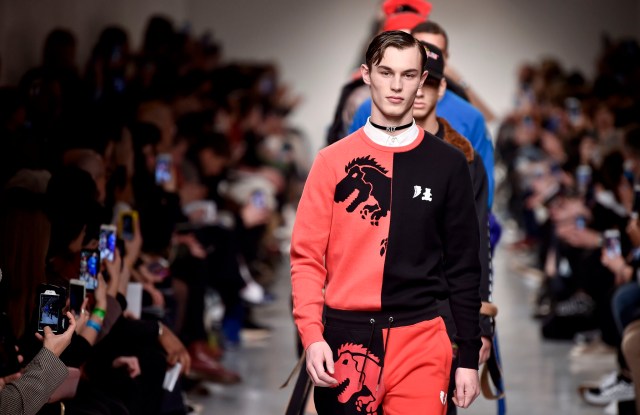 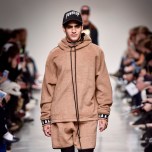 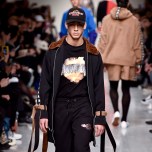 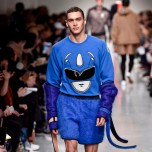 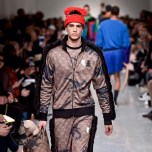 What’s the opposite of camouflage? Bobby Abley clothing. The designer’s duds will never, ever get lost in a crowd, what with the crayon box colors, giant patches of fuzz, teddy bear fur and — this season — lots of straps around wrists and waists, inspired by martial arts.

Abley, who regularly taps pop culture for inspiration — splashing Disney cartoon figures, Louis Vuitton-style logos and Muppet-like fur across his collections — looked to the Power Rangers this season as well as the searing bright colors of the Brazilian flag.

There were tracksuits dotted with patches or strips of chocolate faux fur and a pair of fuzzy boxer style shorts in screaming yellow, worn with a green sweatshirt. Power Ranger images came on the front of a bright blue sweatshirt, while some of the female models — this was Abley’s second co-ed outing — carried helmets and wore bright color-blocked tracksuits.

The knits were among the highlights, as in a languid tracksuit and scarf, all covered with the BA logo.

This season, the designer is also testing a straight-to-store concept with some pieces — sweats and ranger jackets — going on sale immediately at Selfridges and selfridges.com, ranging in price from 65 pounds to 200 pounds, or $80 to $250.

It was, as usual, a romp, but Abley has to start stretching himself beyond all the tracksuits and gimmicks if he hopes to keep his customers clamoring for more.