Taking his cues from artist Ellsworth Kelly, Raeburn turned out camouflage gear with an abstract slant. 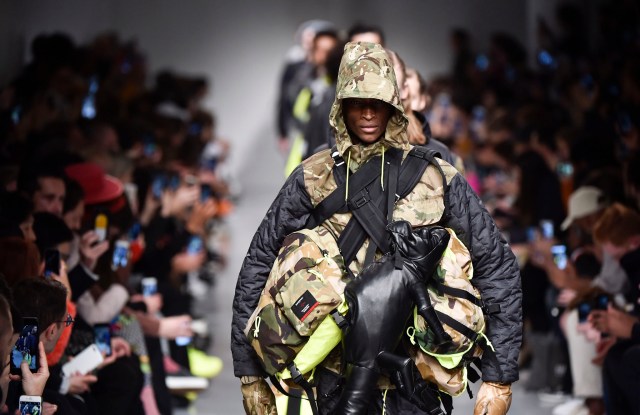 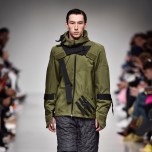 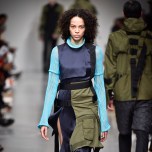 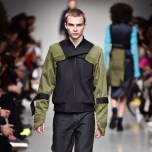 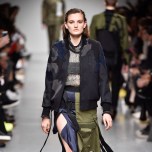 Christopher Raeburn — always with an eye to the rugged, outdoorsy way of life — offered up an appealingly modern take on camouflage gear on his runway Sunday night.

Inspired by the late Ellsworth Kelly and his involvement in the Ghost Army — a group of artists drafted in by the U.S. army to create all manner of inventive camouflage devices during World War II — Raeburn crafted some abstract interpretations of this utility staple. The coolest among them were those that wove in fluorescent yellow with shades of gray — a heavy knit sweater made of a patchwork of angular shapes in those contrasting shades, or a boyish gray duffel coat, embossed with amorphous felt camouflage shapes in navy, gray, and the fluorescent yellow.

Another recurring theme of Raeburn’s work is repurposing military fabrics to more fashionable ends. This time, there were tracksuits for men and women in filmy, parachute material, while khaki parkas, replete with utility straps, were crafted from what were once bomb-disposal garments. The utility theme also informed the designer’s latest collaboration with Eastpak on a capsule collection of bags, made up of rucksacks and holdalls in a patchwork of high-visibility yellow and camouflage print.