Balancing the casual, the classic and the sportif, the knockout collection was built on geometric compositions in unusual color mixes. 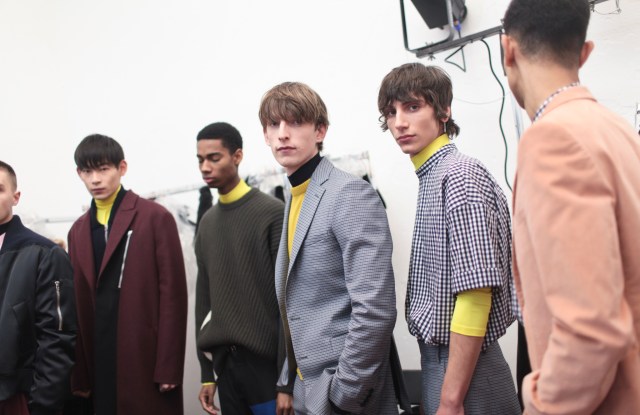 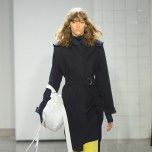 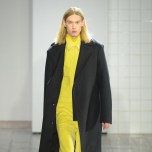 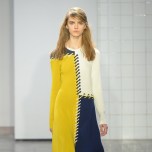 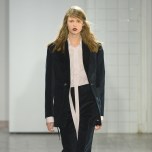 Today’s uncertain times have spawned the rise in military-inspired men’s fashion chockablock with the likes of camouflage and padding. For his hotly anticipated men’s wear debut, Cédric Charlier chose to fight back with color.

The master colorist combined bordeaux with pastels and sharp shots of tangerine and lemon in geometric compositions, like a Kazimir Malevich artwork come to life — anchoring it all with a black and gray base.

The contemporary silhouettes mirrored the women’s pre-fall and fall lines, with crossovers of themes. “I was looking for equality. Since the beginning, I’ve pushed the [Cédric Charlier] woman in a boyish direction. Here, for the men’s, I wanted to incorporate feminine elements,” the designer said backstage.

Balancing the casual, the classic and the sportif, the collection had an infectious, fresh, vitamin bounce to it, much like the show’s  soundtrack: “Hey Boy Hey Girl” by The Chemical Brothers.

Charlier nailed the season’s key trends like color-blocked knits and leather pants, with an undercurrent of performance athleticism. (Compression tops were used as layering pieces and for pops of color; sweatpants were cut ultra tight, like leggings.)

There were novelty pieces like a bomber jacket on which the ribbing of the collar was extended to create a shoulder appliqué and a modern, hybrid T-shirt in a gingham shirting fabric. Nothing took itself too seriously. Even the traditional two-button suit with a semisoft shoulder had a graphic black stripe running up the back of one of the legs; detached shirt collars became another element of the colorblocking.

Just like the line’s standout dusty apricot velvet men’s suit with voluminous pleated pants, there was an uncomplicated ease to the collection. It was a strong start for the designer’s men’s wear even if, at times, it felt a little upstaged by its feminine counterpart. Combining flat and shiny textures, the latter stood out for the shirting, color-blocked leather skirts, romantic velvet dresses with a Nineties flavor and asymmetric skirts and coats in a dark silver glitter finish.