Zegna’s newly appointed artistic director, in his first runway show, firmly put his stamp on the storied tailoring brand, thrusting it into the future on Friday night with a show he described as a clash of worlds. 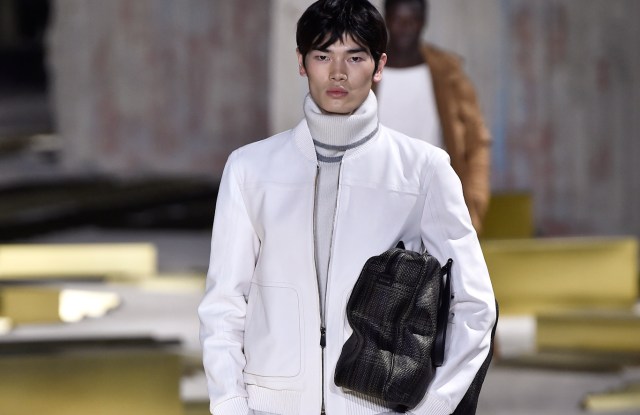 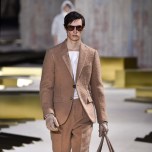 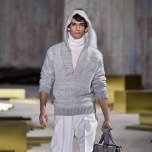 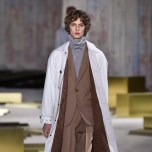 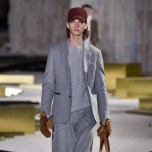 The suit, as we know it, is withering in popularity and in its place a hybrid is rising in the form of tailored jackets and trousers with athletic flair, at least according to Alessandro Sartori. Zegna’s newly appointed artistic director, in his first runway show, firmly put his stamp on the storied tailoring brand, thrusting it into the future on Friday night with a show he described as a clash of worlds. “Sports couture attire, it’s very crafted, but very modern,” he said after the show as models, in floppy turtlenecks, drawstring jackets and tracksuit-style bottoms stood on gold plinths around the grand Hangar Bicocca show space.

A few minutes earlier, models walked amid raw and rickety-looking towers — part of an installation by Anselm Kiefer — wearing Sartori’s debut collection for the brand, a lineup of easy and interchangeable jackets and trousers made from various iterations of cashmere: fuzzy and mixed with alpaca; smooth and blended with silk for a geometric jacquard, or as plain felted jersey. He worked those supple fabrics — which also included padded wool and featherlight nubuck — into a lineup that was snappy and laid-back: Suit jackets came with drawstrings at the waist, with contrast quilted sleeves, or in karate and baseball shapes.

Trousers were loose and fluid, swooshing over handmade sneakers or sturdy-looking shoes with treads. Some were narrow and gathered at the ankle, tracksuit style, while others had leather straps dangling from the waist or zips up the side. (He may have gone a little overboard here with all the sporty references). There wasn’t a tie in sight; there were turtlenecks instead (Sartori was wearing a white one), with floppy necks. Models wore hoodie knits, and thick ribbed ones, too, in white or teal.

While he may be rethinking the suit for a younger generation, he’s not giving up on Zegna’s great bespoke tradition. Fifteen looks from Friday night’s show have been earmarked as made-to-measure: As of Saturday morning clients will be able to order them from nine stores worldwide, with delivery in six weeks. “It’s the ‘tailor-made’ answer for the modern man,” he said.

For a generation that loves a sweatshirt and winces at the idea of a traditional suit, Sartori’s approach could well turn them to tailoring.