Working almost exclusively with leather and corduroy to give the collection a sense of “normality,” Prada riffed on simplicity, authenticity and the naïf, favoring the crude and unsophisticated over the polished and urbane. 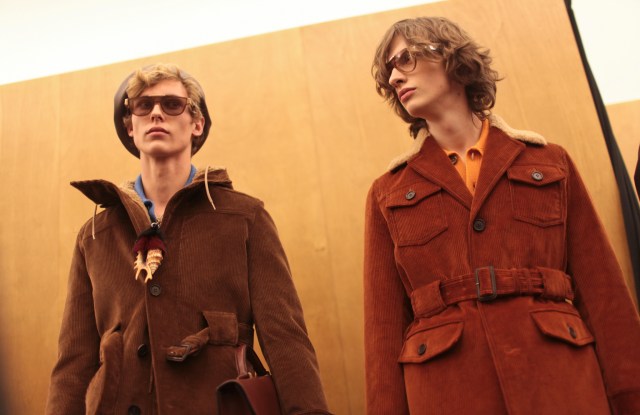 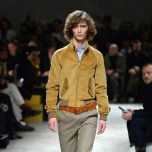 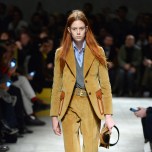 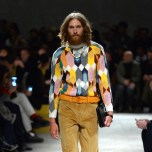 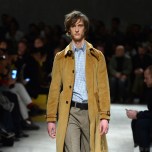 Who nerds it best — Miuccia Prada or Gucci’s Alessandro Michele?

Prada threw down the fuzzy, homespun gauntlet at her fall show, which unfolded against a thought-provoking backdrop of beds, made up with leather sheets, and walls alternately covered in tiles, Formica and terrazzo. The designer rejected an elaborate, fully immersive set in favor of keeping things real — and drawing the audience physically closer to the clothes.

Reality was her big theme for fall. Working almost exclusively with leather and corduroy to give the collection a sense of “normality,” Prada riffed on simplicity, authenticity and the naïf, favoring the crude and unsophisticated over the polished and urbane. What will her urban, black-clad acolytes do with all those earth-toned corduroy suits and coats, some with hippyish leather details or patches of shaggy fur and fuzz? They’ll probably love them.

After all, who wouldn’t warm to the Seventies slouch of those hip-hugger cords, some with contrast patch pockets, the sweaters covered with faded triangle patterns or amateurish watercolors, or the coats done in tobacco leather, lavender tweed or burnt orange corduroy?

Prada said her aim was “to be more human, more simple, more real,” in an increasingly frenetic and overwhelming world and pointed to the watercolors, which her own team created. “I did huge research to find unknown artists,” but she decided against using them in the end, “because we wanted to find the perfect idea of ‘no-art.’”

The designer, who collects vintage Harry Winston jewels, hung twig pendants and puka shell necklaces around models’ necks, snaked shaggy belts around waists and slipped feet into furry Nanook of the North-style boots (some with pom-poms). Models resembled the bearded Viggo Mortensen in “Captain Fantastic,” whose family goes back to nature in the Pacific Northwest.

As she has for the last few years — long before co-ed shows became a trend — Prada showed off a host of pre-fall women’s looks, too, all with a similar spirit but with lots more color and clash: a swirling patchwork fur coat paired with purple booties; a red one adorned with pink fuzz; a leather skirt with big, furry patch pockets, and a lineup of corduroy suits, with her signature sexy slouch.

It’s clearly a moment for the earnest individual, a nerd’s moment, whether he’s decked in chunky jewels and shiny jacquards, Michele style, or roughing it, in style, with Miuccia.