The Italian fashion chamber organized a collective show held at the Armani Theater. 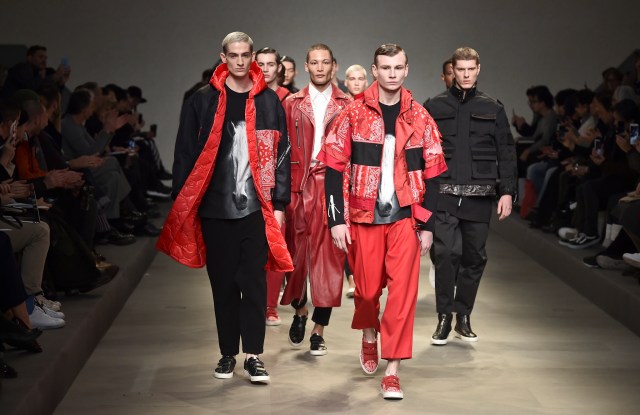 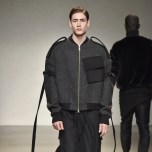 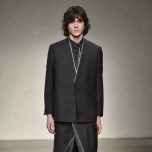 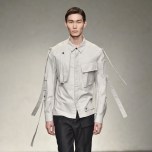 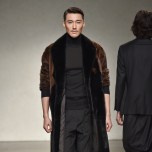 In order to inject more buzz into the last day of Milan Men’s Fashion Week, which otherwise would have featured the Giorgio Armani show as the only significant event, the Italian Fashion Chamber organized a collective runway show to promote emerging international designers. The event was held at the Armani Theater, which the Milanese fashion king has been opening to up-and-coming talents for the last few seasons. The collective show was dynamic and interesting, with three brands offering specific aesthetics.

Japanese label Yoshio Kubo presented a collection inspired by bareback bronco-riding but with a street edge. There were jackets embellished with bandana-like jacquard inserts, pictures of horses printed on glossy bombers and leather jackets with suede panels, while sleeker, more minimal versions of cowboy chaps were worn over fluid pants.
That collection’s masculine attitude contrasted with the childlike spirit of Moto Guo. The Malaysian designer re-created a cartoonish world with boys dressed in children’s sweet clothes. Swans and flowers were embroidered on sweaters worn with short pants, as well as paper bag-waist pants in quilted padded cotton. The color palette of sorbet tones enhanced the dreamy attitude of the lineup.
The art of tailoring was celebrated by the Chinese-native duo behind Consistence, which is based in London. The secrets of Savile Row were on show in the elegant, sartorial clothes, which featured exposed stitching, irregular patches and unfinished hems — all elements usually undisclosed. Activewear influences appeared in the well-executed hybrid pieces, which combined sartorial coats and blazers with bombers and puffers.