David Sarfati is gaining ground with his unbuttoned take on workwear. 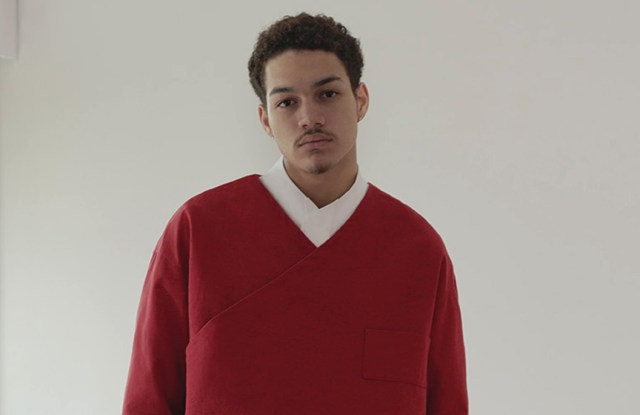 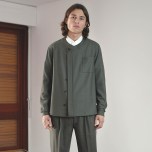 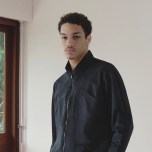 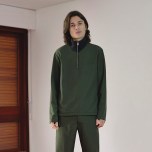 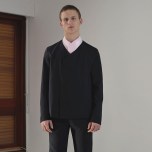 David Sarfati is gaining ground with his unbuttoned take on workwear. His 13 Bonaparte label — which relies on quirky constructions, boxy shapes and technical fabrics to build a seasonless wardrobe — has just gained its first department store accounts, Printemps and Isetan. It will open a pop-up in New York City’s Lower East Side for two weeks in April and is also branching out into women’s wear, launching the same month.

Presenting his Collection 10 at the MAN trade fair, Sarfati pulled denim, the label’s core segment that will now be shown separately, out of the main line in order to give that offer more of a creative focus.

Collarless shirts, many with an Asian workwear feel, and wide elastic-waisted pants made up the core of the collection, worked in a palette that took in red, gray, royal blue and khaki. The brand’s first-ever suit — a double-breasted collarless design — brought the label into smarter territory, while another newcomer was a wool boiler suit.

Wide pants in khaki and black stripes looked dressed up when paired with an asymmetric collarless shirtjacket but offered more of a casual allure with a matching wide-necked top, an example of the label’s versatile appeal.

The company has created a U.S. subsidiary, with Maxwell Anderson heading it up as director, for its launch there. The pop-up will be its first step Stateside. “American customers are such a big part of the business here [in Paris],” said Anderson. “There’s been huge interest from customers in key cities.”