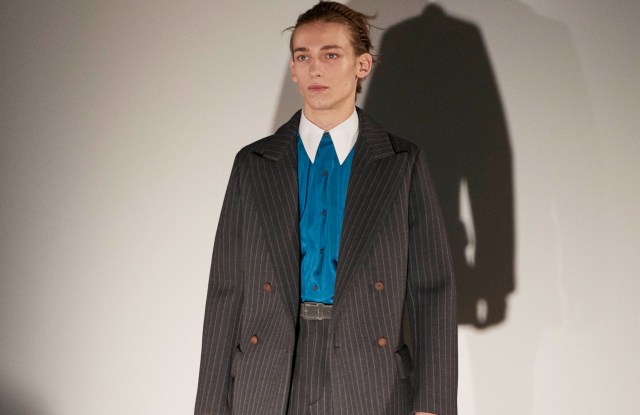 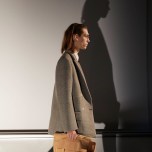 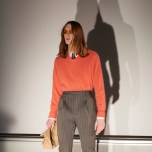 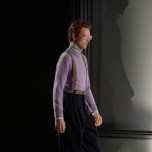 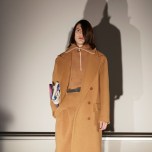 In men’s wear right now, there’s the high-tech camp and then there are the traditionalists. Acne’s fall collection landed somewhere in the middle.

For fall, Jonny Johansson — like many other designers’ existential quests this season — said he gave a lot of thought to the relevance of the suit, and today’s conundrum of how to address that young man who is passionate about men’s wear traditions but doesn’t want to look “like they’re working on Wall Street.”

“Everything is very loud at the moment, there’s a lot of talk about business and Donald Trump, and all of that,” said the designer. “I want to go the opposite way. I feel like people want to slow down; calm and quiet.”

Showgoers got to brush up on their art knowledge at the super charming presentation, held in the Guignard Amphitheater in the Faculty of Pharmacy, in the context of a real art lecture delivered by Professor Georges Papazoff from the Sorbonne.

(In sync with the line’s serene theme, the amphitheater’s desks had been wrapped in different shades of pastel wool, as models took it in turn to walk across a raised platform positioned behind the professor.)

“[The Acne Studios man] is obviously very informed about art, that’s why we’re here today…he also knows about couture and women’s wear,” explained Johansson — who in his contemporary spin on the Eighties businessman combined with the Forties “New Look” of couture amplified tailoring to “almost swollen proportions.”

The designer bonded fabrics with Neoprene to create molded forms — think a double-breasted scuba suit in a wool pinstripe or Prince of Wales check — with this idea of muffling out the noise. Some of the accessories and knitwear had even been sprayed with flock to mattify the surface.

For modern-day sartorialists, there was plenty to pick from, like the classic faux beaver coat to the slim high-waist pants with long pleats at the waist. The knits were also terrific, with cropped colored cashmere V-necks and ribbed ski sweaters with oversized zipped collars — one embroidered with dog motifs — that channeled old-school cool.

The shirts gave some major white-collar action, only with the body in fluid cupro. And the sneakers, with their raised rubber soles, were Johansson’s tongue-in-cheek nod to the idea of power and rising through the ranks.