Kris Van Assche set about creating suits for the streetwear generation as part of his raver-inspired collection. 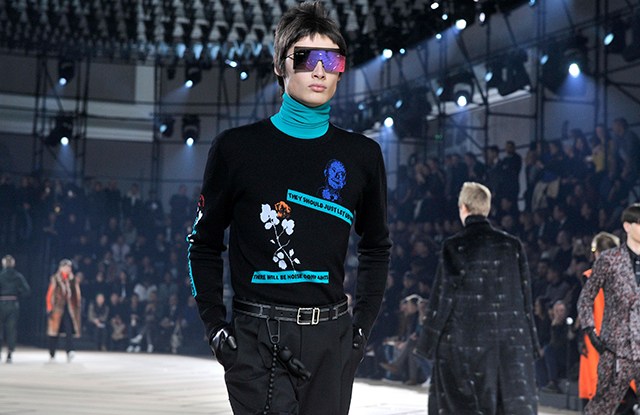 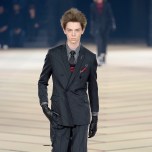 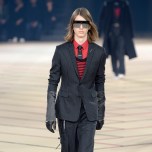 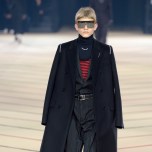 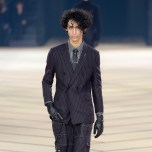 “They should just let us rave.”

On a day when the planet filled with slogans carried by hundreds of thousands of women and men protesting the policies of President Donald Trump, that was the message Kris Van Assche sent out in his show for Dior Homme. The words appeared on a sweater underneath a portrait of Christian Dior, who died long before raves ever became a thing.

You might call it flippant, not to mention utterly apolitical, to fight for your right to party when marchers across the globe are protesting for more fundamental rights, but there’s more than one form of resistance. Maria Grazia Chiuri, the Dior women’s wear designer — who turned out to support Van Assche — famously sent out T-shirts proclaiming “We Should All Be Feminists” in her debut for the brand last fall.

In front of an audience including Bono, Boy George, Karl Lagerfeld and A$AP Rocky, her men’s counterpart delivered a broader manifesto for freedom and self-expression. “The energy of youth as a means of facing the future,” Van Assche explained in his show notes.

His collection merged upscale tailoring with the vitality of club culture. The underlying question was: how do you keep a luxury brand like Dior relevant in an age of Insta-everything ?

Van Assche’s answer was to demystify the suit for Millennials. The trousers on a brown pinstriped version featured cargo pockets. Others were embellished with graphic orange or red accents, hardware, or multicolored topstitching that sprouted loose threads, in a reminder of the house’s couture foundations.

The designer referred to it as “hardcore Dior,” or in the season’s new parlance, Hardior — the slogan that appeared on a cropped, hooded sweat top that was thrown over another suit jacket — not to mention on criss-crossed tape on the runway in an auditorium in the Grand Palais.

“So much has been said about young people not wanting to wear tailoring anymore, like tailoring is over and everybody is doing jeans and sweatshirts and sportswear, and I feel like we at Dior — since tailoring is so much the core of what we do and what we know how to do — we should just reinvent the suit so that it will appeal to young people,” he explained backstage after the show.

“It’s not that the suit is over. We haven’t maybe just given them the right suit. So that was the whole starting point: giving them something loose and cool, and then something really chic on top. That mix, I think, can work for the young generation,” Van Assche added.

With their new proportions — fitted jackets above loose pants, some of them cropped above the ankle — the suits nodded to his fascination with New Wave (he picked Depeche Mode for the soundtrack). But Van Assche also allowed for subsequent youth cultures, namely the gabber and candy raver scenes of the early Nineties.

Fluo touches came via an orange ponyskin trenchcoat with a throat latch, worn with oversized mirrored sunglasses for additional effect and a shearling sleeveless coat hand-dabbed with turquoise dye to give it a neon glow.

Most striking of all were the outfits featuring prints culled from three paintings by Dan Witz, famed for his hyper-realistic portrayals of concert mosh pits — one of which also appeared on the show invitation.

The sight of those thrashing bodies, covered in sequins on a suit or writ large on a sweeping cape with two zippered vents, summed up the great high-low balancing act that Van Assche pulled off, without sacrificing an inch of his identity in the process.