The designer wanted to focus on "shape, construction and cut" and enhance everyday pieces such as the checked shirt, parka and chino. 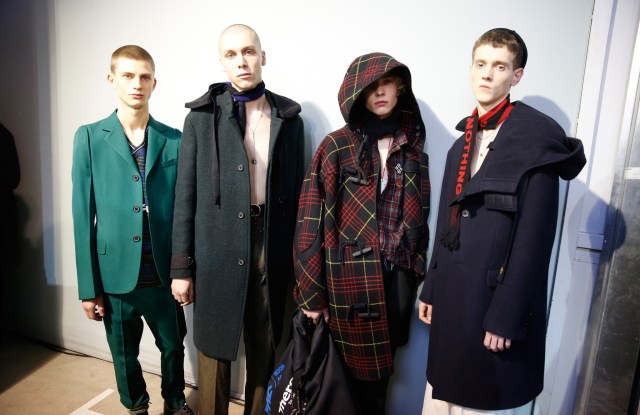 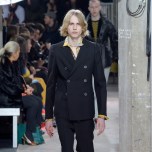 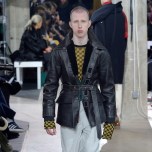 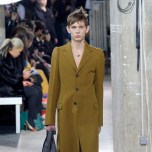 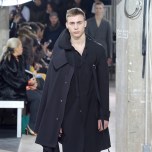 Lucas Ossendrijver is taking his designer vows seriously. The fall collection, he said, was themed “Nothing” and had no logos, art, collaboration, decoration, or vintage references (there were even scarfs with the word “Nothing” on them). Instead, he wanted to focus on “shape, construction and cut” and enhance everyday pieces such as the checked shirt, parka and chino. “My job is to elevate and inspire, to make people want to buy the clothes. This is what fashion is about,” he said backstage before the show.

Elevation came through some sartorial tricks: The double lapels of gray plaid or check coats melted away midway down the torso, while knife folds were pressed onto the fronts and back of jackets and into the sides of the sleeves. Armholes were high and shoulders were sharp and built out, while plaid shirts fluttered from beneath jackets, toning down all the fierce tailoring.

Outerwear had an artistic bent, as in a big black cape that looked as if it had been molded from paper mache while a black leather jacket that was inset, Matisse-like, with triangular bits of blue. The plaid on a duffle coat went every which way, as if the pattern had been shattered — and later reassembled. Knits were interesting, too, with many of them truncated at the waist to reveal more plaid shirts. Trousers veered between the slim and the oversized, with chinos pre-wrinkled with big cuffs.

Kudos to Ossendrijver for relying on his native wit for this collection, which offered much to pique the interest of the sometimes overwhelmed luxury customer. At times, though, it tried too hard to be innovative. Sometimes the classics are fine just as they are.