The conceptual show was a tribute to the sartorial tradition. 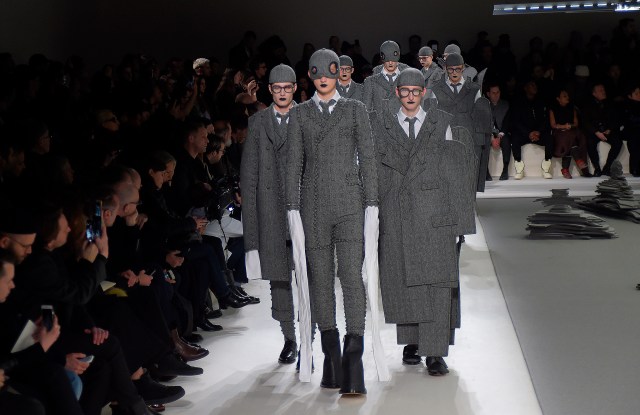 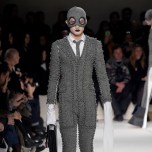 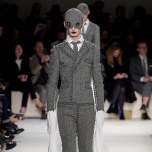 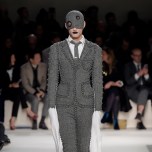 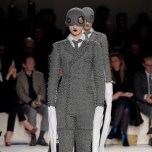 As the industry ponders the life expectancy of the formal suit, Thom Browne stated his case with a show dedicated to the sartorial tradition. Not that there was anything cheerleader-y about the delivery. The solemnity of the affair felt more like an office funeral, with a gray carpet covered in small towers of oblong carpet cuttings arranged in piles, like a Japanese stone garden, with strip lighting overhead as the set.

Capping off an existentialist season, the designer sent out to a Philip Glass soundtrack a creepy procession of towering office clones from some distant future, blindly inching forward in their black platform hooves and what one fashion editor was overheard describing as “the hat equivalent of a flying mask,” referring to their weird Harris Tweed caps fitted with vision obscuring asymmetric eyeholes. White face paint and black lipstick finished off the look. (These models sure earned their paychecks).

Each was dressed in the exact same uniform of shirt and tie — their elongated sleeves trailing almost down to the floor — and a superfitted gray suit in a handsome Harris Tweed, each of its parts joined by rows of covered buttons, with extra rows of buttons for embellishment. They created a 3-D bobbly relief, marking out the seams like sartorial Frankenstein stitches. (A total of around 50,000 buttons were used in the collection, and around 1,200 yards of Harris Tweed.)

Their only point of difference was the leather goods, with one pulling an itsy-bitsy rolling suitcase, and another, say, a supersized briefcase.

The next round of office clerks emerged sandwich-boarded between rigid 2-D displays of suit patterns, like flat paper doll outfits. They wore round gray spectacles and Harris Tweed brogues, their deconstructed leather uppers flailing.

It was a powerful buildup to the more merch-friendly part of the collection which stretched the suit’s dimensions every which way, from signature shrunken takes to swampy volumes. Some of the jackets flowed into regal trains, as models walked in groups, like some royal procession, to organ music and arias.

“It’s really just an appreciation of making clothing, so taking all the pattern pieces that went into the classic pieces people know me for, and creating an installation out of the pattern pieces, and then showing them in all different ways,” said Browne after the show. “It’s a celebration of quality clothing and tailoring. I’m feeling like I want people to see clothing being made really well.” Touché!