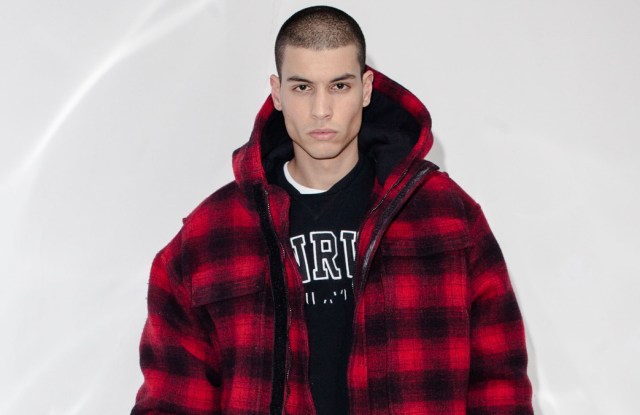 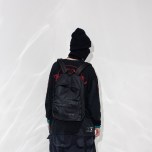 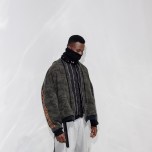 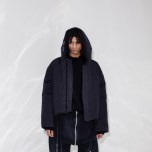 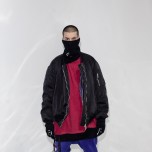 The Nineties French street culture classic “La Haine” got Ben Taverniti’s mind ticking for fall, as a film that had marked him in his youth. But in a season where men’s wear is taking a reality check, the collection, by extension, also reflected his own look (read layered-up silhouettes hooked on a baggy pants, hoodie and bomber combo).

Taverniti even used his personal inkings — including a skull-and-crossbones design on his back and the Unravel logo’s broken white lines tattooed on his hand — to embellish the collection, in embroidered motifs on the backs and sleeves of garments, say.

And seeing as the designer likes to go about life without being too laden down, there were pockets absolutely everywhere — from one big enough to hold a Mac book on the back of a distressed washed nylon bomber to 18 utilitarian 3-D patch pockets running up the leg of a drop-crotch cargo short.

Silhouettes were worked in heavy fabrics, enhancing the layered look and creating new volumes. “The tops are all oversized but chopped shorter, redefining the proportion of your closet essentials,” the designer said.

The majority of the pieces were reversible, including a bomber that transforms into a zipper hoodie, with Taverniti playing on fabric contrasts “to give the feeling of luxury on the inside; I like the laid-back look with hidden luxury.”

Following the same line of thought, the women’s pre-fall included reversible oversized sweatshirts with one side in silk; black dresses in a devoré velvet camouflage motif; Nineties-style baggies, and a deep purple velvet cape masquerading as a bomber.