This was a sophisticated outing from a rapidly evolving designer. 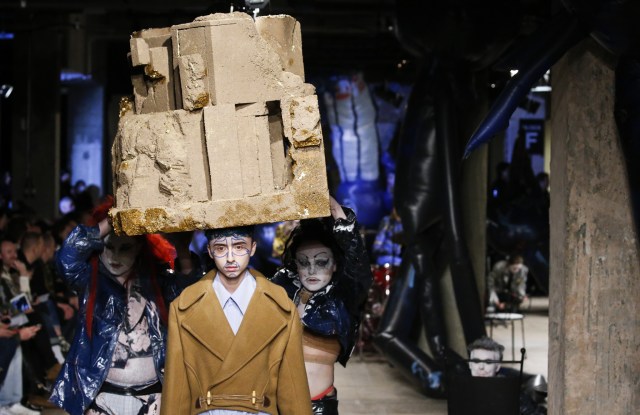 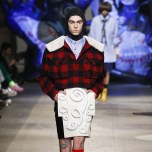 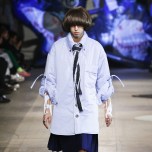 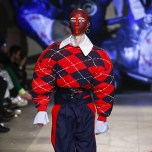 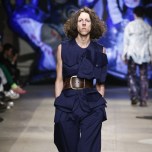 Charles Jeffrey set the scene for another eccentric and over-the-top show by seating mock critics at bistro tables on the catwalk. They entered snorting with disgust, huffing in exasperation or gesturing with utmost annoyance. Sound familiar? Once The Prodigy’s “Firestarter” started blasting, the faux editors proceeded to scream and applaud in frenzied adoration or gag in disgust as the looks came down the runway.

It was an arch comment on a fickle press and the accolades recently enjoyed by Jeffrey, who was awarded the trophy for Emerging Talent at the recent Fashion Awards in London, presented by one of Jeffrey’s heroes, John Galliano, whose work at Dior was alluded to in the elegant silhouettes, theatrical styling and corsetry details.

This was a sophisticated outing from a rapidly evolving designer. Showing both his gender-ambiguous men’s wear with an expanded women’s wear offering, Jeffrey confidently married the exhibitionism and flamboyance of gay culture with traditional Scottish hallmarks like tartans, kilts and Pictish symbols, throwing military details and slick references to historical dress into the mix, too.

Tailoring and outerwear were especially well-executed. A navy suit with a peak-lapel jacket fastened with a kilt pin and wide trousers looked as though it had been riddled with bullets, while a navy flack jacket with exaggerated pockets was tightly bound by a wide brown leather belt and worn with roomy pants.

Jeffrey indulged his love of Teddy Boy style in a blue tartan suit, worn with a striped short red waistcoat, and in another suit, pinstriped, with blue velvet lapels on the blazer and buttons up the legs of the narrow trousers. Other highlights included form-fitting knitwear printed with pagan symbols, flowing trousers with side stripes, and a women’s duffel coat with massive cuffs.

The designer said this collection was an expression of “growing pains” and a channeling of pent-up anger: “Growing up gay, when you run home from being bullied, you always think, ‘One day I’ll show the bastards.'” He’s showing them now.