The designer looked back to his role in establishing a new minimalist take on men's wear in the mid Nineties. 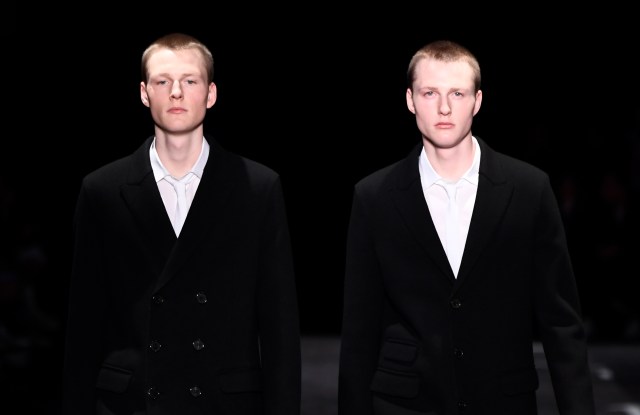 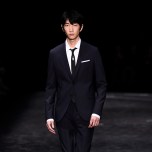 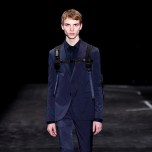 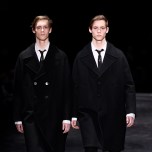 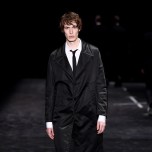 To remixes of bouncy Nineties classics like The Verve’s “Bitter Sweet Symphony” and Underworld’s “Born Slippy,” Neil Barrett looked back to 1995 and his role in establishing a new vision of men’s wear at Prada, “when we tried to clean up the situation and make it a lot more minimal, to change the expected codes of masculinity.”

“What I tried to do here was take all these uniforms like streetwear, actual military uniforms, tailoring and sportswear and tweak the proportions but within the boundaries of masculinity,” said the designer backstage.

The first exit saw twins in plain matching silhouettes with slight variations: black coats — one single, and one double-breasted — with white shirts and ties. Same for the outing with the large overcoat with rounded shoulders and a signature “couture” cocoon volume paired with simple, narrow pants a few looks down.

The designer sent out multifabrications of the same shape on coats, from black leather to a khaki-and-black flecked wool mélange, alongside urban pairings like leather biker pants with a more dressy checked wool jacket. With the khaki city coats, he said he liked the idea of “taking a military coat and making it like an opera coat.” The mood carried over to the women’s, which played out like a mirror reflection with heels.

Particularly redolent of the Prada years were the black nylon coats and the total-look suits in micro tie-print jacquard motifs.

The dynamic staging was strong, with the back-and-forth nature of the choreography and the play on reflections in the mirrored columns that echoed the sense of multiplicity.

As for the clothes, like with fellow Nineties greats like Helmut Lang, they went back to clean basics that were so simple and wearable they were almost normal. But in a world of maximization, his approach felt like a welcome palette cleanser.