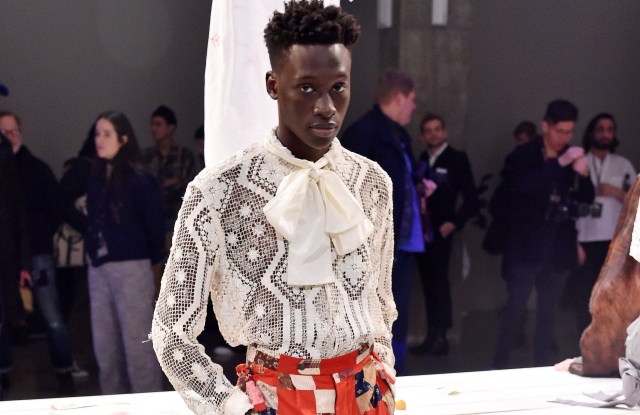 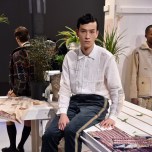 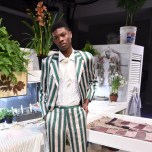 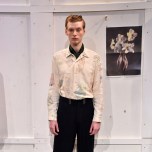 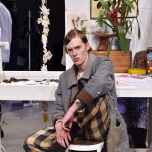 Emily Adams Bode’s presentations always have a cinematic effect. She lets attendees in on a world that’s personal to her and creates characters who sit nicely within the cross sections of her upbringing, which included living in Atlanta, taking trips to New England to go antique shopping and spending summers in France.

Last season, her uncle and his attic served as the starting point and this time around she’s used Homer, an actual quilt dealer who lives in Massachusetts, as the protagonist in her very specific, well-cultivated world.

Homer also studied botany at Harvard, and Bode tapped her boyfriend to create the set, which was a mix between an actual lived-in home and a greenhouse. Models stood — and sat — among potted plants, framed pictures of greenery, white wooden tables and makeshift closets that were decorated with quilted handkerchief shirts, a new development for the line, and printed trousers.

Bode said she wanted to move more into tailoring, and her take on the category was whimsical with collegiate undertones — a green and white striped suit with floral embroidery was a stand out. She also showed jackets and coats made from cowhide along with cropped trousers, and fluid shirts accentuated with pussy bows.

Over the past few years, Bode has been picked up by 13 global retailers including Tres Bien, Totokaelo and Opening Ceremony. She pieces her clothes together from vintage textiles, sometimes making it hard to reproduce things at scale. But Bode said she’s beginning to work with fabrics that have a higher yardage — meaning she can reproduce, say, 600 shirts, which are made in either New York or India, where she also has pieces embroidered and beaded, but not one will be the same.

That’s what makes Bode’s work appealing. It’s her attention to handcraft and her focused, artful vision that sets her apart from the mostly derivative, run of the mill clothes that litter New York Fashion Week: Men’s. She’s a refreshing slot on the calendar and a promising talent.