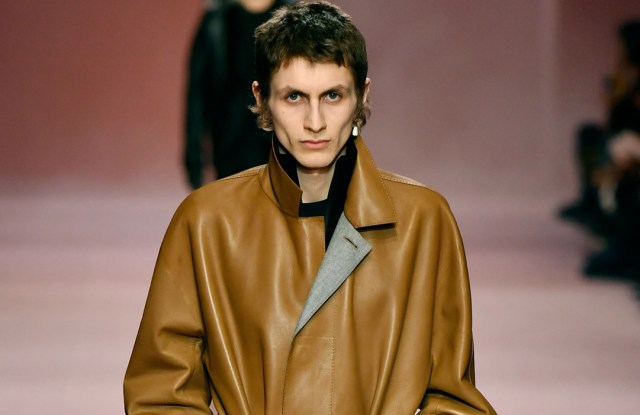 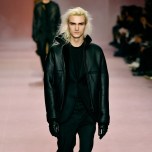 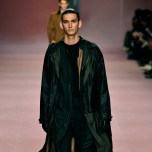 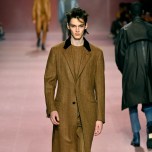 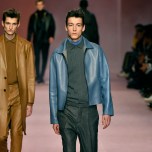 Trust Haider Ackermann to make prawn cocktail sauce the color of the season.

Not only did the invite to his Berluti show come in the dusty pink shade, but it also provided the backdrop to his parade of mouth-watering leather coats, casually elegant suits and nifty technical gear, like a filmy caramel-and-gunmetal gray parka worn by Stella Tennant, one of several women to walk in the show.

If anyone can get men to think pink, it’s Ackermann, who has a knack for using unexpected shades to inject subtle flamboyance into even the most conventional outfits. Witness his turtleneck sweater and pants combo in vibrant shades of deep purple, which made a statement with minimal effort.

“In a world that is louder than ever, I like the idea of a quiet man. Serene, cool, collected yet standing on his own two feet,” the designer said in his show notes. “As time goes by, the wearer’s personality becomes embedded in the clothes so that they become intimate and filled with emotion.”

Like most skilled colorists, he used brighter hues — sky blue, lemon and forest green — sparingly. That pale pink shade only appeared on two looks: a baby-soft cashmere suit and coat. Instead, Ackermann mostly stuck to a classic palette of black, camel, olive and white.

Nor did the clothes represent a major evolution. Rather, he worked on hidden details — banishing seams, ditching shoulder pads — to conjure a laid-back, confident allure. Glossy leather coats and jackets nodded to the Alessandro, the lace-up shoe made from a single piece of leather devised by the house’s founder.

Indeed, why shout it from the rooftops? The man who can afford these clothes has nothing left to prove.