A wabi-sabi aesthete, Masanori Morikawa celebrated the imperfect with a clever lineup of high waists, bell-bottoms and endless coats. 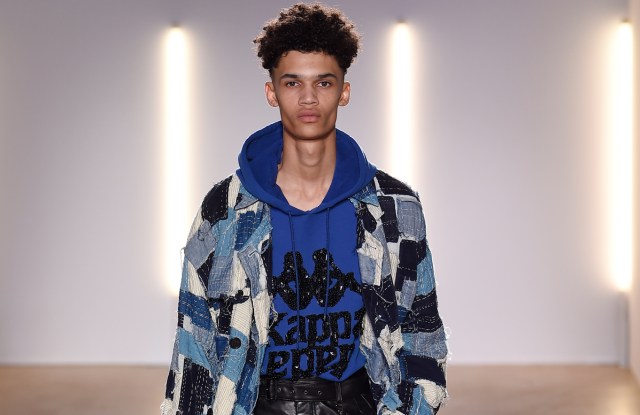 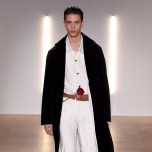 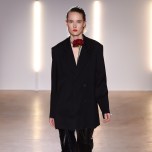 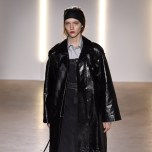 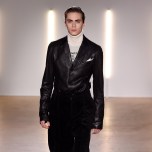 It promised to be a cool show, judging by the crowd — young, focused, oblivious to the rain. Dressed in streetwear, naturally.

Further evidence: eight sets of drums, scattered around the room.

Earplugs were passed out in the front row, but Casey Spooner, wearing a weather-proof Sankuanz coat, declined. “I like it loud!”

Masanori Morikawa sent out a clever lineup of high-waisted trousers, bell-bottoms and coats — of all kinds; this designer is tuned-in. The drums pounded (precision ensured by a click track delivering the tempo through earpieces), segueing into lighter percussions at times, as men and women models weaved around the room, following a spiraled runway track.

Red roses, real ones, were offered as a fresh and sexy accessory, attached to chained chokers, fixed to belts or carried nonchalantly. Their images appeared on a purple and white letterman-style jacket, as well as a T-shirt, also sexy, which was paired with a long, lush coat in furry brown velvet.

An aesthete of the wabi-sabi vein, Morikawa celebrated the imperfect by twisting the classics. Adding an extra panel to an ivory double-breasted suit with pinstripes — should we call it triple-breasted? — the buttons were nudged to the side. A bright, blue baseball cap completed the look, marked with a reference to the label, a D and an A.

The back-to-back Kappa logo signaled a new collaboration, appearing on tracksuits and bomber jackets. So did the Dickie’s tag, poking up on the back of twill pants — a new, higher-waisted version. Patchwork denim coats, a contemporary take on Seventies vintage, came in different lengths.

David Lynch’s spiral quote, the one about heading upward and evolving, provided inspiration for Morikawa’s East-meets-West blend. And move forward, he did.