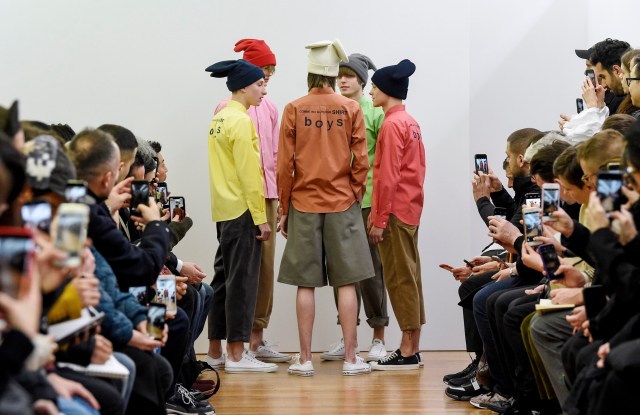 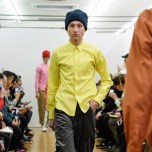 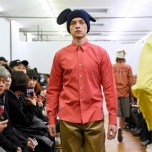 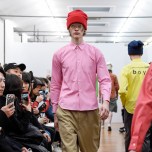 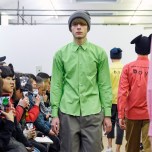 Kicking off with a cluster of youths in the Boy subset — smaller sizing, more youthful cuts — in solid colors and ear-topped beanies, Shirt is the designer’s answer to the idea that the shirt is a subject long mastered. There were ears everywhere, bouncing softly with every step but kept shapely by hidden piping, on shoulders and sweatshirts, that segued into appliqués of matelassé forms.

Further on, in Shirt proper, the idea of collage continued, with patches placed over and under in organic shapes. Those evolved into panels held back by wide buckled straps, perfect to hang hands in.

There was simplicity, but not complacency, in everything: Even the simplest button down, in a blue micro-gingham check, had squiggly buttons in primary colors. Another had a double lapel so cunningly cut that it felt utterly normal.

Near the middle came shirts featuring eight artworks by Jean-Michel Basquiat — Untitled, Cabeza and Ernok among them. These had the sense that they were not just on display but were integrated in Kawakubo’s visual discourse, with cascades of dots tumbling down the back, or large stripes extending away from the canvases to curl around the ribs.

It was hard not to recast the double layered bleached denim jackets as a form of contemporary elegance descended from the double-breasted Comme suits the artist sported on Kawakubo’s spring 1987 runway.

Nonetheless, those were also part of a final group in which outerwear, fabric or man-made leather dominated. Peeking underneath, you could make out the even simpler shapes of Shirt’s Forever perennials.

A common thread in it all, from Basquiat to Boy — not to mention Homme Plus — was the idea that a childlike stroke could be used to express sophisticated ideas. True in art, but also in comic books, as seen peeking on plasticized totes. The metaphor of a gateway holds: at Comme, it’s worlds nested within worlds within worlds. One plot hole that never needs filled: how easy it is to wear one of her Shirts.