Kris Van Assche drew inspiration from the founder’s defining New Look of 1947 for women, hinged on the wasp-waisted jacket known as the Bar. 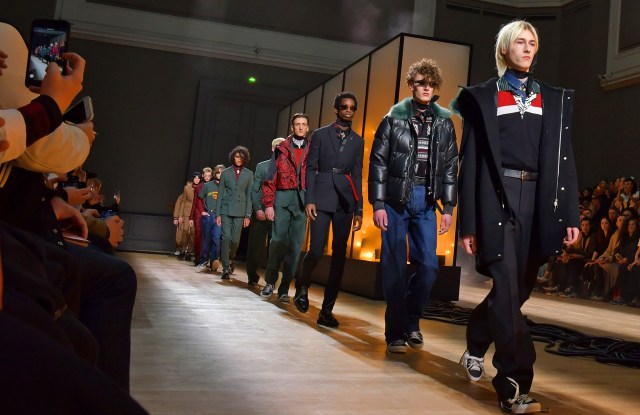 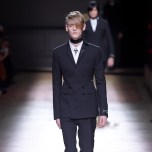 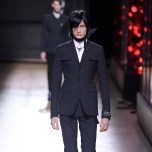 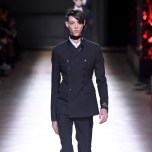 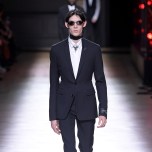 Suck it in fellas! While an unabashed  fan of wide, puddling pants and roomy sweatshirts of late, Kris Van Assche decided to take Dior Homme back to its roots in sharp tailoring.

In fact, he stretched back to the founder’s defining New Look of 1947 for women — hinged on that wasp-waisted jacket known as the Bar — for his winning fall collection. He wasn’t shy about the nipped midsection, demarcating the horizontal seam cut into the sides of some jackets with white piping.

They looked handsome rather than feminine, vaguely recalling the neatness of military uniforms, though the designer said backstage he was careful to avoid that reference.

“Mr. Dior often took his inspiration from officers’ and parade clothes, so some of those details really translate on men quite naturally,” he explained. “Some of the research I did, I decided not to keep, because once I translated it on men it became too military, which I don’t feel [is] right for the moment.”

No matter which way you splice it, the slim black suit remains the linchpin look of Dior Homme, and a defined waist simply exalts the broadness of shoulders and the length of the legs.

Intent on underscoring the savoir-faire of Dior’s men’s department, which was not part of the giant anniversary retrospective that just wrapped at Les Arts Décoratifs, Van Assche attached oversize labels to suit sleeves showing the atelier address on Rue de Marignan, and the logo was also splashed on the backs of blousons in muddy workwear shades.

“Everybody was so full-on on 70 years of haute couture, but we, as a men’s division, also have an address and I have very experienced people, so I wanted just to make a little statement out of that,” he said.

The cast included five Nineties models — including Cameron Alborzian, Mark Vanderloo and Arnaud Lemaire — to show that Dior Homme is a brand for men of all ages. And as a touching denouement, Van Assche sprinted over to longtime Dior chief executive officer Sidney Toledano, who is taking over LVMH Fashion Group, and planted a kiss on his cheek.