The designer's take on "normal guys" isn't to be thrown to the dogs. 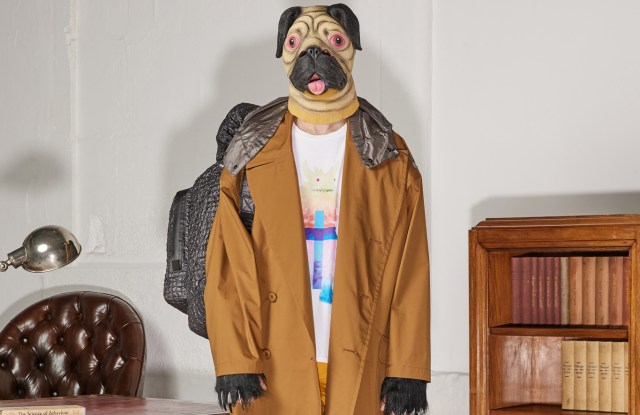 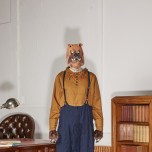 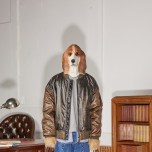 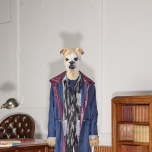 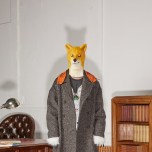 This year will soon turn into the lunar Year of the Dog, and Julien David was already on-theme as he eschewed a catwalk in favor of a canine show, putting his models in dog masks for his presentation. Notably absent was women’s wear, which David noted he would treat separately this season.

At first glance, except for their canine faces — David said he’d sourced this impressive variety of species online —  man’s best friends could have well been part of the fashion crowd who came to observe them in their natural habitat. “I wanted to take away the faces to consider the human species, sociologically, as another member of the animal family,” David said, pointing out tableaux featuring man’s best friend in his natural habitat, ranging from the office to the gym, to hanging out on one’s stoop or playing classic video games with friends.

“I’m the ultimate normal guy,” he said, pointing out the mashup of styles that was one part utilitarian grab-and-go, one part his personal experience of living on the road for fashion. How he delivers his “regular guy, who doesn’t necessarily wear normal clothes” isn’t dadcore material by anyone’s standard.

His premise of normality was colored by his love of textiles, and the abundance of options thanks to the brand’s Tokyo base: there was a metallic hand-printed canvas bomber jacket on a dog that was a dead ringer for the dog in Daft Punk’s 1997 “Da Funk” clip, right down to the boom box at his feet; a poodle lounged on his bed in permanently wrinkled wool dungarees; denim was the custom-wash Japanese fare that David has accustomed his devotees to; a shirt was cut from a toothsome artisanal-looking linen and wool check, and technical paper-thin nylons galore. It is those subtle variations that make his ordinary guy a species unto himself.