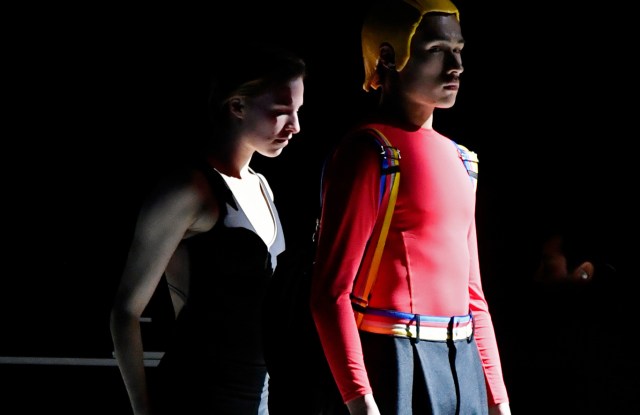 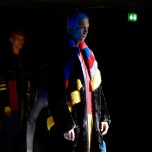 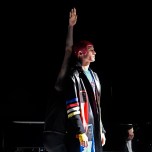 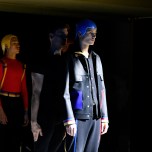 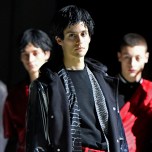 After spending time with his mother recently, Stéphane Ashpool had dance on his mind, or rather the memories of an early childhood lived in the studio as his mother Doushka, a former prima ballerina and choreographer, worked. This collection was an intensely personal sonnet of silhouettes to her.

As guests filtered into a studio at the Conservatoire National Supérieur de Musique et Danse, the woman of the hour was overseeing dancers from the Paris Opera Ballet performing their warm up. Once things got under way, there were three acts, but it wasn’t Titian’s “The Three Ages of Man,” and more three snapshots of the designer’s childhood, to a score performed by professional jazz pianist Gael Rakotondrabe.

Act one: out came a lacquered red coat with stiff raglan sleeves. Strips of fabric fluttered down the front of a jacket worn with blood-red jogging trousers, feet wrapped in dancer strapping. Later, there was a blouson in dévoré and with a voluminous swatch of black satin on the back, neat trousers, a black-and-white overcoat, each with a touch of red.

Act two: a riot of pastels, animal patterns and sportier separates. Pearls studded along the chin gave a brace-faced look. Youths — including Larry Vickers, Ashpool’s godfather — ambled on, playing with their reflections in the studio’s mirrors, or with the audience’s gaze, as Rakotondrabe interpreted Michael Jackson’s “Bad.” Act three: models sporting glittery helmet hair looked like life-size Lego figures and were decked out in what looked like simplified uniforms decorated in blocks of primary colors to delineate their features.

Taken as an ensemble cast, it was a tidal wave of larger-than-life clothing fit for the scene. Step by step, all of this gelled with Ashpool’s habit of tweaked, recomposed sportswear even if, at times, it was as jarring as a dancer tripping over their own feet.