Demna Gvasalia went back to his designer roots, “and back to the [Martin] Margiela approach.” 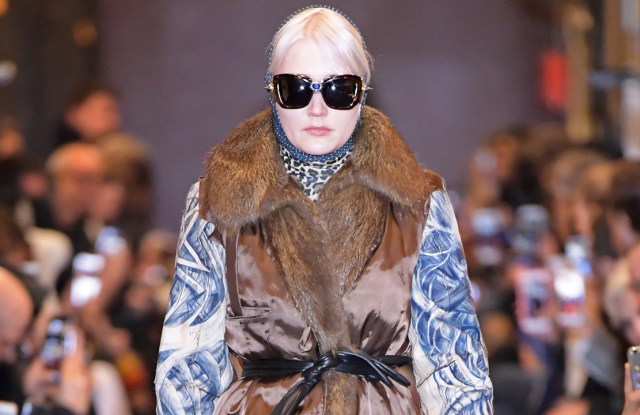 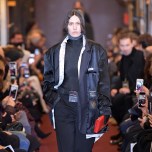 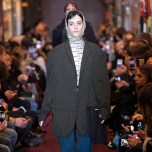 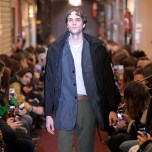 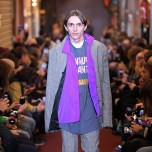 With the fashion world’s eyes glued to the next fashion moves of Vetements, as the kings of appropriation, anyone expecting a change of tactic would have been disappointed.

Instead, Demna Gvasalia, looking “the elephant in the room” right in the face, went back to his designer roots, “and back to the [Martin] Margiela approach.”

“It’s very personal, I wanted to show what Margiela means for me and Vetements. It’s an approach, it’s a way of loving clothes, breaking the rules with those clothes,” said the designer backstage.

But he did it his own way, of course, with his signature mash-up of signs and prints, thrift-store sportswear collages and Eastern European peasant styling, with silhouettes built from piled-up oversized shirts in a jumble of prints and headscarves.

But the collection, presented in the indoor vintage market in Saint-Ouen, in the outskirts of Paris, also had a softer, chicer side to it, like the opening look pairing a belted bourgeois fur coat flipped inside out to expose the nylon lining, matched with a polka dot scarf. Or a look fusing a floral black prairie dress to the outside of a reversed khaki trench, with printed full bodysuits, or “morph suits,” worn under a lot of the women’s looks.

This idea of turning oversized jackets around to expose the tags was very Margiela-esque, as were the naf tribal tattoo T-shirts and crumpled suits that looked as though they’d been picked off the bedroom floor.

He included a flat tabi sock — based on the traditional item of Japanese clothing — in a tongue-in-cheek nod to the endless reflections of appropriation.

“I wanted to underline what appropriation can mean today in fashion. And where it comes from, because we really need to look to the source very often,” said Gvasalia.

“Everything is appropriation, we live in a world full of references that are there to feed us, but not in order to copy from it, but to create something new from it,” added the designer. For the collection, he also handed out T-shirts to kids from the local kindergarten in Zurich, where the brand is now based, with as the creative brief, you guessed it: “The elephant in the room.”

“Because this season we’re all talking about the elephant in the room, and how good it feels to bring it out. Because it’s in every room. Margiela had his invitations be drawn by kids and when I saw that, I thought, ‘Wow what a genius idea.’ I think that influenced my way of thinking about fashion; the rawness the naivety,” he said.

Remixing his favorite things from his own youth, he added Marilyn Manson T-shirts, cut up his favorite T-shirts to create quirky assemblages of graphic messages and included a hookup with Nineties club-kid sneaker brand Swear. The customized denim with hand doodles and kids’ stickers was supercute with a palpable playful, more joyful mood to the collection.

“When I started I was much more visceral, and last year a lot of things happened to me and I think I started to ignore the thoughts and follow my gut feeling,” said the designer.

“This is the first collection for which I applied this method of working with emotion and self-expression rather than an intellectual approach to the production of the collection. Now it’s more about fun and fashion.”