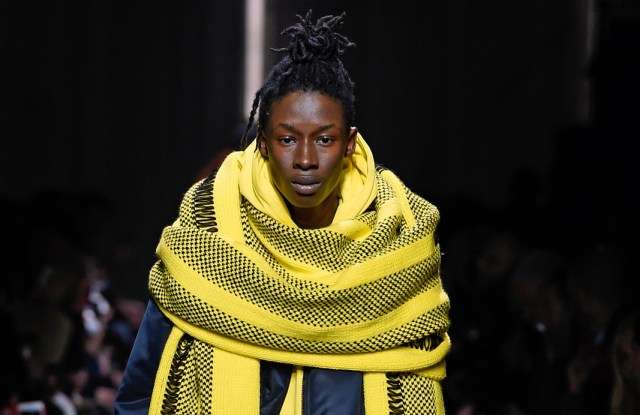 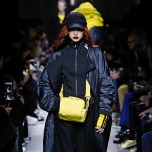 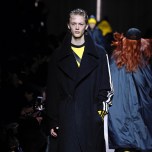 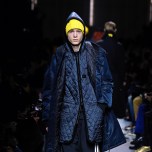 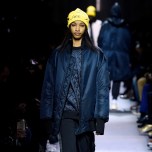 New sneaker debuts at Y-3 included the Bynder with a leather upper and hand-stitched elements, and the BYW basketball silhouette. But the big news was the new Carbon 4-D technology used on some of the soles.

“We’ve had this period of 3-D printing, but with how things are evolving, Adidas — closely linking itself with partners — really is at the cutting edge of innovation,” he said, explaining the process as the sole of the shoe being drawn from the liquid. “As it hits the air, it starts to form into the structures.

“There are no molds. It’s at the very early stages, but we’re already producing, and in the future we [will be able to] tune every single sole to your bodyweight, shape, how you run,” he added. “We really want to connect that with our world, because here we can show different perspectives. If it’s only for the athlete, there are so many rules. In our world, we’re allowed to explore and have a different freedom.”

The palette was characteristically dark save for a shot of acid yellow, and some great blue tweeds on coats.

The big brown camouflage floral print was reminiscent of the tropical prints from Yamamoto’s first collection for the brand.

The designer played with the brand’s iconic stripes, flipping them to one side or sending them down the front of a black satin dress, as if it had morphed out of a tracksuit.

The inside-out reversible hoodies with contrast seams looked fresh, as did the return of the iconic Adidas tracksuit from the Seventies.