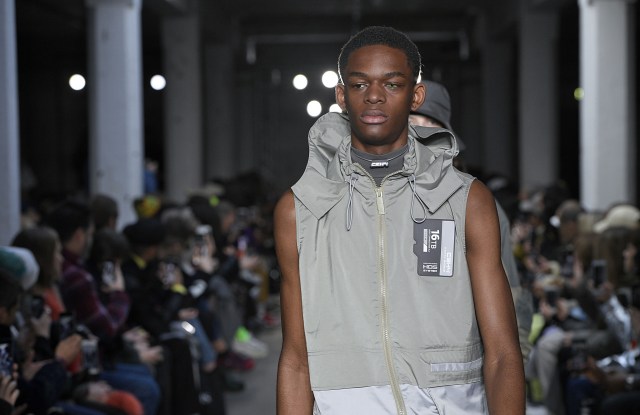 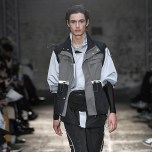 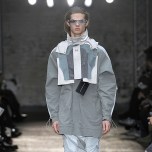 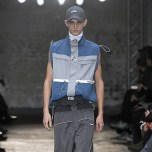 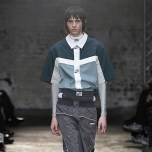 Yixi Chen imagined the future through the lens of the past, putting herself in the shoes of a 20th-century sci-fi fanatic and projecting a rather bleak outlook. Shades ranged from varying degrees of grays and blues to black, although she managed to inject a few pops of red — in the form of two nylon jackets — to break up the neutral palette.

She leaned heavily toward utilitarian and sportswear looks with a retro twist, and toned down formal staples such as neckties and button-down shirts by leaving them loose and untucked as layering pieces. There were drawstring tracksuit bottoms aplenty, some with double waistbands and others paired with two-tone anoraks and long line jackets. Pockets were big, in shape and in number, with one jacket featuring four large drawstring pockets at the front.

Piping details, safety buckles and logo tags added some dimension to the collection. They perked up the pieces which would otherwise have felt too repetitive, as the silhouettes were virtually indistinguishable. The collection, too, would have benefited from more color. Chen’s dreary outlook materialized toward the end of the show as a skull-and-crossbones print emerged under the strobe lights.