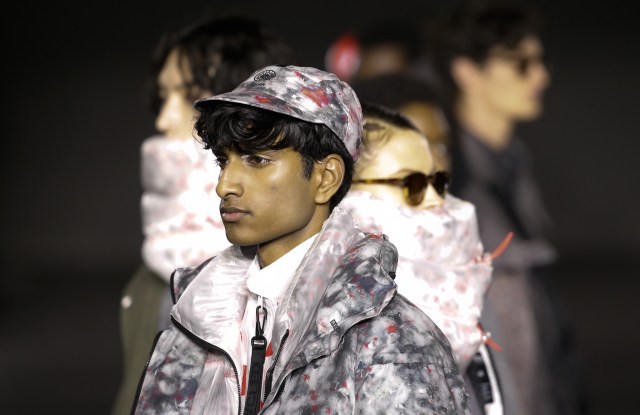 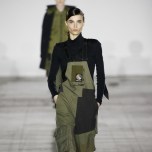 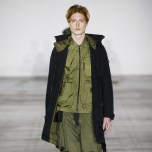 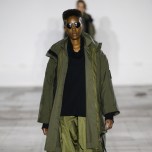 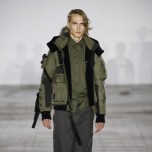 To mark 10 years in business, Christopher Raeburn took a look back at the pieces that have defined his brand in the last decade and reworked them with confidence.

His sporty, utilitarian aesthetic was still there in roomy parkas featuring large cargo pockets, patchwork tracksuits, parachute culottes and puffer jackets, often accessorized with gigantic snoods that reinforced the concept of clothing as protection mechanism, which has been at the core of the brand from the get-go.

Simply put, Raeburn is sticking to his guns and for good reason.

His no-fuss, practical approach and commitment to responsible design have been gaining a new relevance, as of late.

He wants to build on this momentum by pushing the sustainability agenda to a new level.

Alongside his brother Graeme, who recently joined the brand as its new performance director, he introduced a series of innovations and used recycling as a means to spark his creativity.

Among the highlights was a see-through puffer jacket created with recycled nylon and featuring filling made from shredded fabric off-cuts, which made for a happy riot of color and texture.

Raeburn also added more sleek, monochrome looks to the mix, as well as a range of playful, neon patchwork outerwear that resembled cycling vests and showcased the designer’s skill at reconstructing garments.