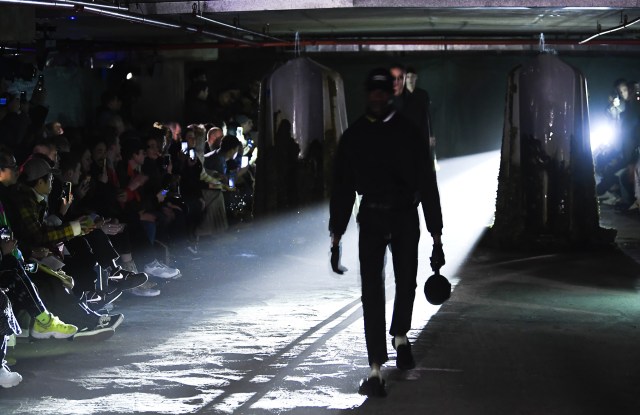 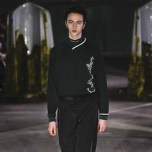 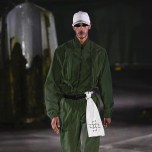 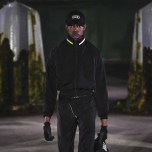 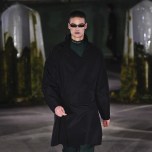 The Cottweiler fall 2019 collection was called “The Lost Art of Cruising” — and not the nautical variety. Designers Matthew Dainty and Ben Cottrell lamented the decline in face-to-face, personal interactions, specifically cruising in parks, brought about by the increasing use of social media and dating apps to arrange romantic liaisons.

“Though I was totally oblivious to it until I became older, I grew up near one of the biggest cruising grounds in Europe, at the edge of Epping Forest,” Dainty explained backstage. “So it’s something that surrounded me for a long time. And when I realized what was happening, all of a sudden it opened my eyes to all these tiny little codes, like a look or a touch of the cap, all these things that mean something that we’ve lost through social media and using apps.”

The show’s setting, a chilly car park a dozen floors below ground, was just one of many arch references to cruising. One model took to the catwalk in a green tracksuit and baseball cap, styled with a dog-walking leash and ball-thrower but no dog. Little towels suspended from belts were a twist on the “hanky code” of yore broadcasting bedroom proclivities. Audi, Lotus and Mercedes car logos on caps and T-shirts were a nod to interludes in cars parked in dark places. For the finale, a set of headlights swept the darkened space before the models prowled the runway, skirting the splashing moss-covered urinals in the anonymous gloom.

As for the clothes, this was Cottweiler’s strongest collection to date. Saucy references aside, the designers also drew on the formality of sports like cricket, golf and tennis, where you need to dress to a certain standard to be admitted to the club house. Consider a pristine white buttoned-up polo shirt worn with white-to-grass-green dégradé track pants and loafer/trainer hybrid shoes, or the preppy white collar — worn up — that peeped above a smart black knit, teamed with a nice layering of puffer jackets and logo track pants.

There was lots of luxury in the mix. Especially noteworthy was a moss green shearling parka, black silk pants with a green splatter print, and the opening pair of crushed velvet jeans treated to look like bleached denim.