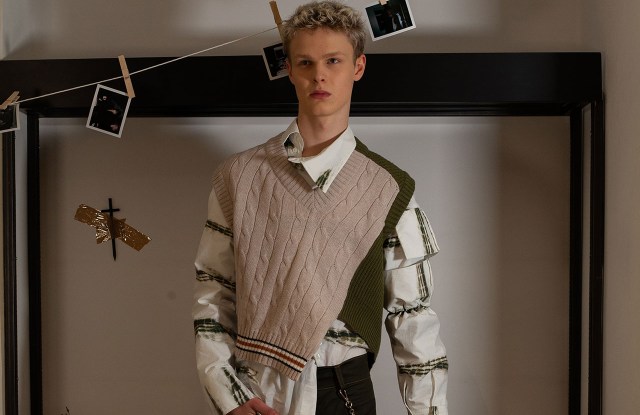 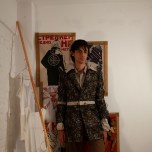 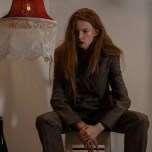 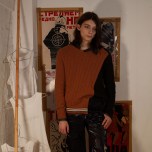 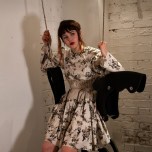 Lada Komarova drew on her childhood growing up in Soviet Russia, mining memories of summers spent in the countryside dacha and recollections of life in Moscow.

“It was a time of mixed emotions,” Komarova told WWD. “Of feeling incredibly oppressed by society but at the same time feeling incredibly important because you’re not just living for yourself but you’re a part of something big; you really felt a part of a big community.”

This translated into some interesting ideas, combining classically gauche suburban wear from Komarova’s childhood with more contemporary urban codes. For instance, a brown tweed blazer that saw the lapel wrap around like a collar and fasten on the other side of the neck, a typical working-class style, with truncated black jeans that fastened at the ankle with buttons.

Also interesting was a sharply tailored black half-tuxedo jacket, with a collar that morphed into a strap on one side, leaving one side of the chest and an arm bare, which was worn with matching trousers tucked into army boots. Sounds odd but over a knit or T-shirt, on the right guy, it would look cool.

Elsewhere a little floral dress, nipped at the waist with a nylon panel and drawstring, hinted at those dacha days, and clever tailoring saw the hem of one jacket folded up and fastened by a suspender clip into a sling-type apparatus. For when holding the vodka gets too onerous, perhaps?