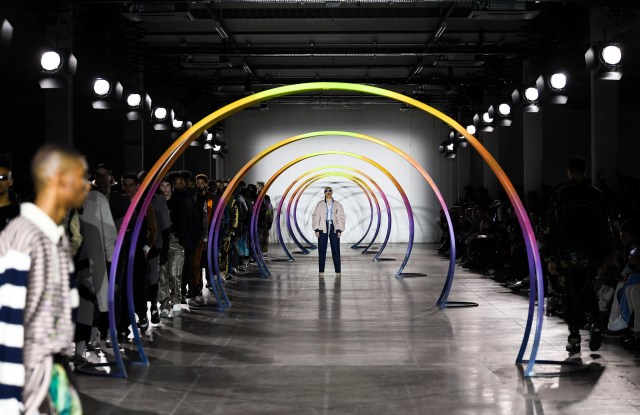 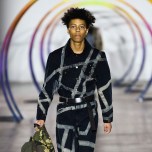 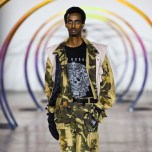 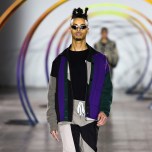 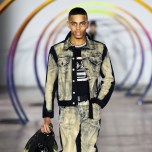 Liam Hodges considered themes of identity, interdimensional living, tesseracts (not the weird blue cube from the “Avengers” movie franchise, but a four-dimensional hypercube), outdated authenticity, human mutation, and pondered the tedium of knowing what to wear, where to go and what to listen to in order to have the perfect life. Heavy, right?

“Hackers,” the 1995 film starring Angelina Jolie, was Hodges’ cinematic reference, which accounted for the many Nineties references and subtle style cues. The T-shirt that said, “The Martians Are Coming To Save The World” was a direct lift from the one worn by Jesse Bradford as Joey in the movie, while bleached or tie-dyed looks, and striped tees and knits also echoed the decade.

Futuristic, sci-fi touches came via a wet-look shell suit and metallic glints in the PVC piping that ran around the panels of suiting and the panels of patchworked tracksuits, which were modeled on the planes of a tesseract.

A collaboration between Hodges and Ellesse made its debut, with snazzy trainers worn throughout and a series of looks inspired by Ellesse’s skiwear, featuring a macro view of salt crystals.

Hodges’ suiting, a recent addition to his lineup, was well cut if occasionally seeming a bit overworked with the shiny piping demarcating panels and seams, but looks like the rugby knit of contrasting stripes that was worn with great jeans, bleached and overdyed with muted orange and green, added a playful, optimistic element.