The result was a refined, sophisticated outing that blended military styles, animal prints and clean-edged tailoring for male and female urbanites alike. 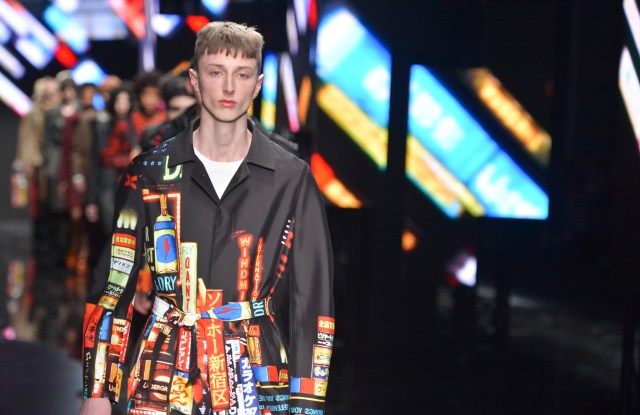 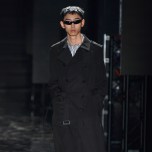 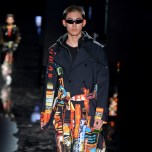 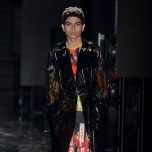 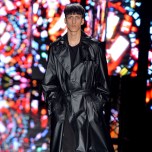 He may be marking the 20th anniversary of his brand, but Neil Barrett isn’t looking back to past collections. Instead, he explored a territory that may be well-trodden, but one that was new to him: Punk.

“I wanted to ask what punk would look like if people were looking at it today,” said Barrett. “Then there’s the idea of second or third generation people from all over the world who were actually born in Britain, so my narrative was this idea of bringing together, retaining traces of their ancestry, heritage, patterns, fabrics and designs and then mashing it all together.”

The result was a refined, sophisticated outing that blended military styles, animal and ikat prints, fur and clean-edged tailoring for male and female urbanites. The collection unfolded against the backdrop of a fast-moving film of bright lights, big cities, and flashes of neon, while models walked on a runway that resembled an oil slick.

The coats, in particular, were great. He did them in a tailored check with animal-print fur collars; styles with a futuristic feel in crinkly, shiny fabrics or opaque plastic-y ones; frock coats; others with off-kilter buckles, or made from strips of different animal prints.

Barrett said he loved the idea of breaking different elements apart and patch-working them back together. Trousers and trenches came with a bright neon sign decoupage-style pattern or a black and brown zebra one. A sweater looked as if it had been splashed with three different colors — pink, red and black – and others had feline spots.

The show invitation proudly stated “Born in Britain,” and the designer is set to open his first store there soon — a stand-alone unit in London. With all of that punk energy, it will be some homecoming.