Prada paid homage to Frankenstein, slapping his face onto pencil skirts and his cartoonish, disembodied hands onto men’s shirts. 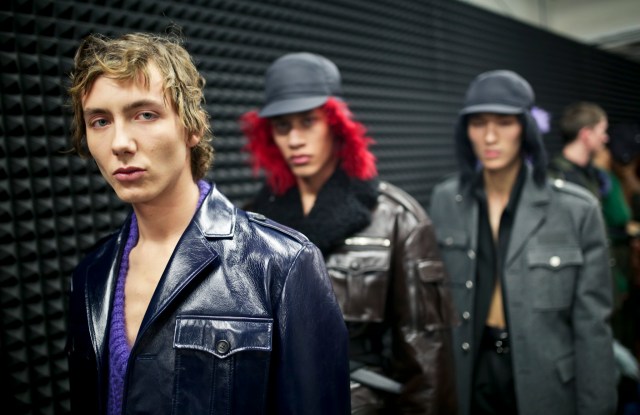 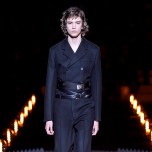 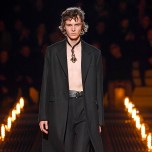 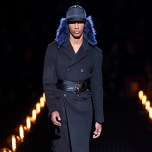 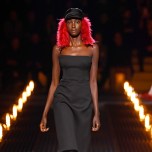 The collision of humans and humanoids, science and sci-fi and the agonies of Frankenstein’s monster were all playing on the mind of Miuccia Prada as she worked up her fall men’s collection, a clever blend of the fantastical — and the commercial. The set, with its squishy foam floors, circuit board runway and dimmed yellow lightbulbs, had an otherworldly feel to it, a place of isolation and protection.

Prada said she’s been thinking a lot lately about people’s humanity and sensitivity, of the forgotten, the struggling and of the “weakness and delicacy” of humans at a time of danger and fear. She’s also been pondering Frankenstein’s monster, who marked his bicentenary last year, a violent creature who was looking for love. “There’s this idea of love, of this pitiful person looking for it, and of the human impulse to be understood, and not to feel isolated or betrayed,” the designer said backstage before the show.

If all this sounds heavy or melodramatic, it wasn’t. Prada’s sense of humor shone through in the darkness of the venue; all the bright, fuzzy hats and patches on sweaters — someone stuck his finger in the electric socket; the heart patches pinned crudely onto the breast pockets of dark coats, and snowflake-like sparkles dusted onto sky blue shirts and dresses, the latter a taster of her fall 2019 women’s collection.

Prada paid homage to Mary Shelley’s famous monster, too, slapping his face onto pencil skirts and his cartoonish, disembodied hands onto men’s shirts that were also covered with lightning bolts and roses.

But peel away those layers, pick off the Frankenstein chains, slip off the multiple belts that snaked around men’s and women’s waists alike and what was left? None other than a perfectly formed collection of signature military coats and jackets, tailored suits with high-waisted trousers in black, gray or army green, lots of fuzzy sweaters and a natty navy blue topcoat. It was lovely, safe and salable.

Nothing strange or scary here.