Pierre Davis of No Sesso reinterpreted working girl staples in an imaginative way. 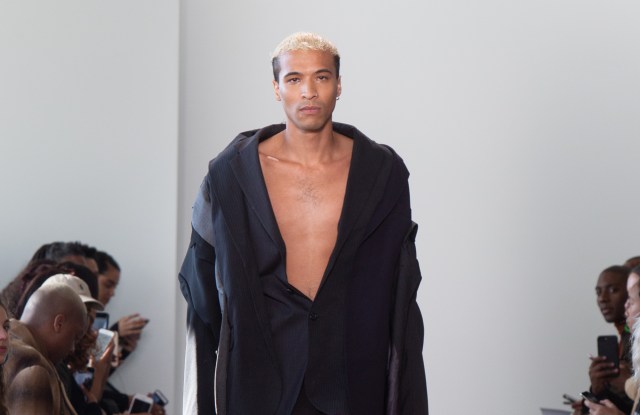 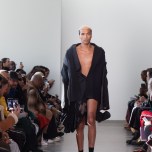 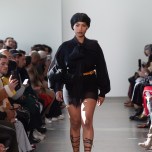 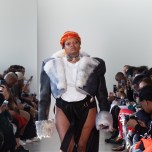 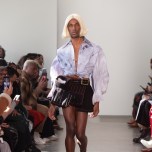 Over the last few years, Pierre Davis, who is based in Los Angeles, has built a tight community of creators around her line, which is meant to target all ethnicities, genders and sexualities — “no sesso” means no sex/no gender in Italian.

Members of that community — musicians Steve Lacy and Kelsey Lu, for example — appeared in the show wearing looks inspired by Glamazons and business girls. In the No Sesso world, business women, men and nonbinary individuals go to work with their hair in doobies or bouncy, Sixties-style wigs. They wear the working girl staples — suits, blouses and shirts — but reinterpreted in imaginative ways.

One portion of the show featured velour, which Davis said was inspired by Sean John’s velour sets from the Aughts but reenvisioned as actual suits with broad shoulders and decorated with rhinestones spelling out “No Sesso” on the butt. Another portion presented suiting fabric turned into a voluminous down jacket with an oversize collar or half a blazer sewn to a nude dress that was adorned with a string of pearls. The traditional pussy bow turned up on loose knits, a signature for No Sesso, and a backless blouse. Suits took on a more fluid structure as well, coming in hand-dyed silks. Davis imagined another version of the suit as pleated miniskirts paired with matching shirts that she updated with voluminous sleeves. Davis also played with leather. Strips of snakeskin and leather were made into a corset with gold grommets, floppy bucket hats and an attachment to a classic white shirt.

It’s clear that Davis has a different perspective, which is nice to see in New York, and myriad ideas that she’s able to bring together in a cohesive way.