The designer offered up a collection filled with Seventies references. 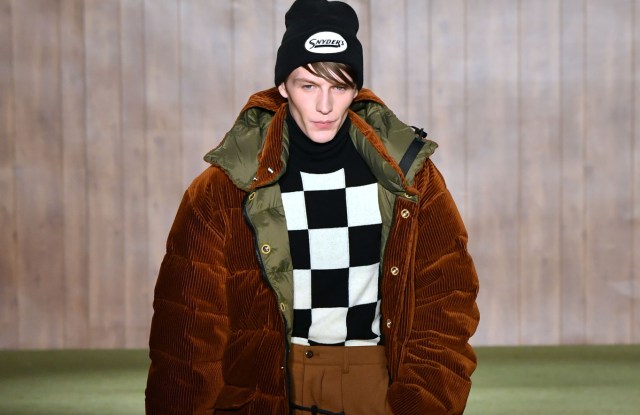 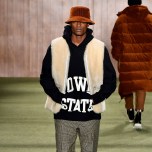 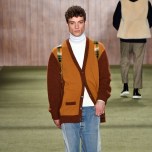 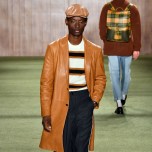 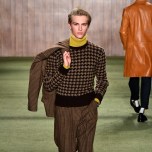 Todd Snyder transported guests to his basement, circa 1970 — think green carpeting and wood paneling — for his fall runway show.

The first look — a chocolate brown corduroy parka over a black-and-white checkerboard sweater with high-waisted pegged officer’s pants — set the perfect Seventies tone. Other Seventies throwbacks included a cognac-colored leather topcoat with a newsboy cap and a large assortment of shaggy dog sweaters.

“It’s all about irreverent prep and mixing East End boys with a bit of a street edge,” Snyder said backstage before the show.

His use of haberdashery-style shirts that looked more like thrift store finds, and a reconstructed Iowa State hoodie — the designer’s alma mater — paired with tight velvet sweatpants drove the point home.

The true highlights of the show were the outerwear collaborations with Descente, the high-end Osaka-based ski brand. Snyder put his own take on the technical gear by using English fabrics in fitted parkas. Other outerwear included oversize statement coats that Snyder called “sleeper puffers,” another collaboration with Crescent Down Works.

The vivid color palette of oranges, purples and jewel greens added an extra layer to the already athletic offering and were also employed on Snyder’s assortment of suits and tailored topcoats.

The collection stuck to what Snyder knows best: an appropriate wardrobe for the classic guy looking for a modern twist.