Ten months after taking the helm at Berluti, Kris Van Assche showed his debut collection in the opulent setting of the Opéra Garnier. 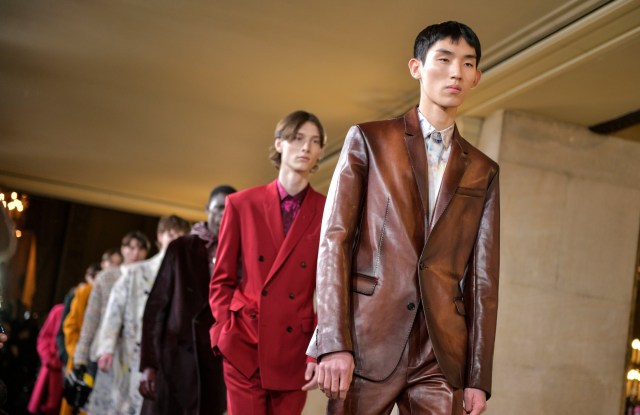 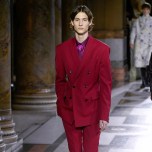 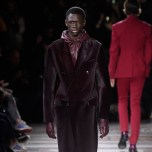 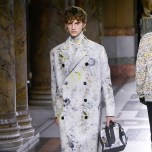 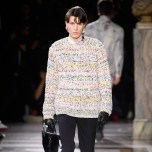 Way to make an entrance: 10 months after taking the helm at Berluti, Kris Van Assche showed his debut collection for the luxury label on Friday against the opulent backdrop of the Palais Garnier in Paris, in front of an audience presided by Bernard Arnault.

To say the stakes were high is an understatement. Van Assche was the only designer from last year’s game of musical chairs at parent company LVMH Moët Hennessy Louis Vuitton that had yet to showcase his creations on the runway, after Kim Jones at Dior, Virgil Abloh at Louis Vuitton and Hedi Slimane at Celine.

Those who have followed his career, including his recent 11-year tenure as creative director of Dior Homme, were in for a surprise. Known for opening his shows with a signature black suit, Van Assche instead nodded to Berluti’s roots in footwear by bowing with a brown leather suit hand-dyed to mirror the luxury label’s patinas.

Those dyes also seeped into the color palette of the collection, with models ascending the sweeping staircase of the 19th-century opera house decked in flamboyant reds, pinks, yellows, blues and greens.

“If my previous work always started with a black suit, I can definitely say that here it starts with the shoes,” Van Assche said during a preview.

The designer was inspired by the marble tables at the house’s state-of-the-art “manifattura” in Ferrara, Italy, where artisans dye the shoes, leaving behind rings of color that merge with the veins of the rock in delicate patterns. A photo of the working surface was reproduced as a print on silk shirts and oversized coats.

A precise and methodical designer, Van Assche confidently stepped outside his comfort zone. He demonstrated a sure hand with tonal silhouettes, pairing a fire-engine red suit with a powdery fuchsia pink veal leather coat, and a glossy oxblood kangaroo fur coat with a chocolate leather hoodie and pants.

He also showed on women, sending out models including Adut Akech in his-and-hers tailored jackets and coats with gently jutting shoulders, some paired with leather motocross pants. (The house declined to say whether the outfits would retail in smaller sizes.)

It was sportswear, but not as we know it. The fabrications were exquisite, as on a ribbed sweater knitted from 1,000 meters of multicolored leather string, or a reversible black leather and fur duffle coat. The white sneakers were long and pointy, their shape based on his reinterpretation of Berluti’s classic Alessandro loafer — all angular edges and metallic hardware.

Longtime customers of the brand needn’t worry: Van Assche also made sure to include some terrific plain suits and coats, which he showcased on young and mature models. It proved to be the ideal casting for his declaration of freedom — confirming that good things are worth waiting for.