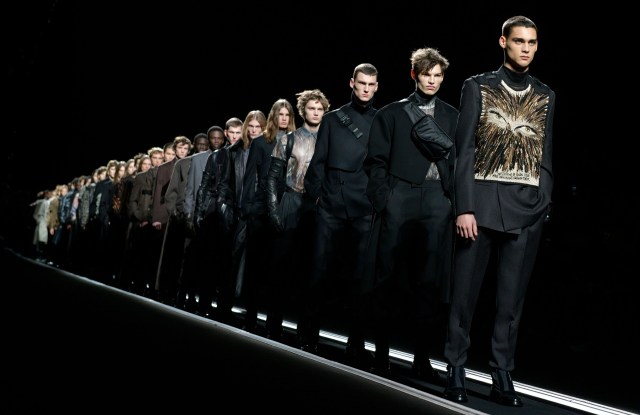 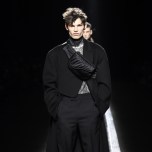 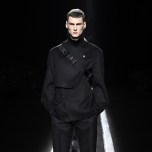 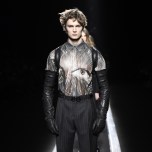 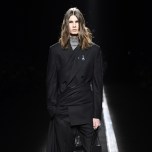 For his third Dior Men collection in eight months, Kim Jones set up camp at the foot of the Eiffel Tower in a monumental rectangular black tent that loomed against the setting sun.

Having commissioned artists to create giant sculptures for his debut in Paris in June and his pre-fall show in Tokyo in November, this time he let the venue be the statement. His fall line, featuring a collaboration with U.S. artist Raymond Pettibon, was shown on static models ferried past guests on a 250-foot-long conveyor belt.

As Daft Punk’s “Musique” sent the subwoofers shuddering, the first look emerged: a gray suit layered with a tactical vest hand-embroidered with Pettibon’s owl design. Jones said it was no relation to the “gilets jaunes” — the antigovernment protesters known for their distinctive yellow vests who threaten to disrupt the Paris men’s shows on Saturday, prompting Dior to move its display forward by one day.

“When we were looking for show venues, we were just looking at the statues around Paris with all the armor, and I thought it would be nice to see what something over a suit would look like — so that’s where it comes from. It’s not a reference to what’s happening now in Paris,” the designer said in a preview.

The armor theme was echoed in the metallic sheen of a leopard-print trench coat, or the soft breastplate panel on a funnel-necked pea coat. The techno elements clashed with couture flourishes that nodded to the heritage of founder Christian Dior — think black opera-length biker gloves paired with animal-print mink tops.

Broad sashes — made of velvet, technical satin or zebra-printed mink — looped through tailored jackets and coats, in an update of last season’s side-fastening Oblique jacket.

The Pettibon pieces were terrific, from the sweaters featuring his drip-effect reworking of an archival Dior leopard print, to the prints, jacquards and hand embroideries based on his anarchic version of the “Mona Lisa,” including a hand-beaded shirt that required 1,600 hours of work.

A cult figure of the Southern Californian punk rock scene in the late Seventies and early Eighties, Pettibon was the subject of a 2017 retrospective at New York City’s New Museum. Jones knew his work from the covers of albums by Sonic Youth and Black Flag, and was subsequently introduced by Stella Schnabel.

“The general public probably doesn’t know who he is, but they would know what his work looks like, and I think that’s an interesting concept. It doesn’t have to be someone famous,” Jones said of the collaboration, which follows his previous partnerships with U.S. artist Kaws and Japanese illustrator Hajime Sorayama.

“It’s one of my favorite collections I’ve ever done,” he added, noting that his debut line — arriving in stores now — is breaking sales records for the house. No doubt he has another winner on his hands, though the presentation did not fully do it justice. With such a cavernous venue to fill, why not let Pettibon loose on the walls?