The Berlin collective delivered a sci-fi collection that reflected on the theme of exodus, using the symbol of the nettle to represent immigration. 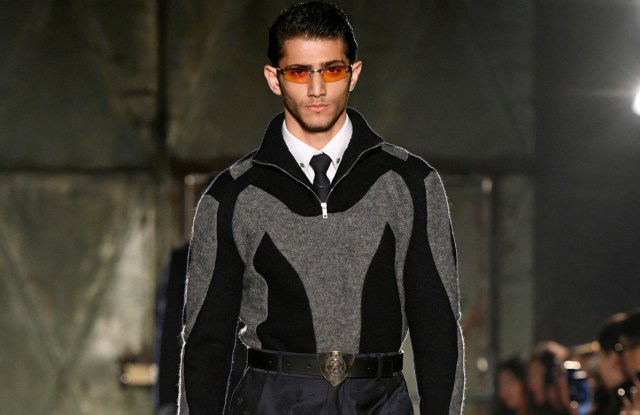 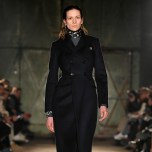 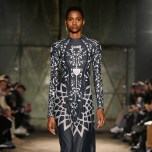 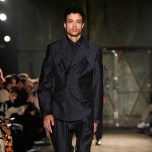 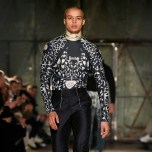 GmbH has suited up — and it looks great. The Berlin-based label’s fall 2019 show — its second coed collection — at underground club Péripate on the gritty fringe of Paris featured a number of tailored looks departing from the brand’s overall streetwear vibe.

“I love cutting and it’s always been a desire for us both to focus on tailored pieces,” said designer Serhat Isik, who, alongside Benjamin Huseby, heads the Berlin collective. “For whatever we do, be it trousers or a denim jacket, we’re always very concerned with pattern cutting. And this season, with the brand growing a bit, I had a bit more time to be at my desk to cut tailoring properly, and enjoy that part of the job as well.”

Coats and blazers were delivered in a neutral palette of gray, cream and midnight blue, some of them printed with tiny mining picks in reference to Huseby’s upbringing in an industrial area of Germany. Supportive harnesses on the back of jackets were both utilitarian and bondage-like, and the men’s looks in particular skewed tight and sexy.

The collection, titled “Rare Earth,” telegraphed a distinct sci-fi vibe. “Leaving this planet, in a way, is the ultimate migration,” said Huseby, explaining that the label had pondered the theme of exodus for this season.

Denim came splattered with white and gold paint. The models sported colored sunglasses and toted metal toolboxes used as clutches. Chunky trainers in collaboration with Asics finished off some of the looks.

Skin-tight Lycra tops on men and dresses on women featured the brand’s signature nettle print. “The stinging nettle is the most robust plant and will grow anywhere,” Huseby said. “But it is also kind of unwanted. At the same time, the soil needs nettles as they are incredibly healthy and nutritious. For us, it’s a metaphor for being an immigrant.”