Demna Gvasalia tackled a new subject: the Internet, especially the Darknet, though there was no real design news in the collection. 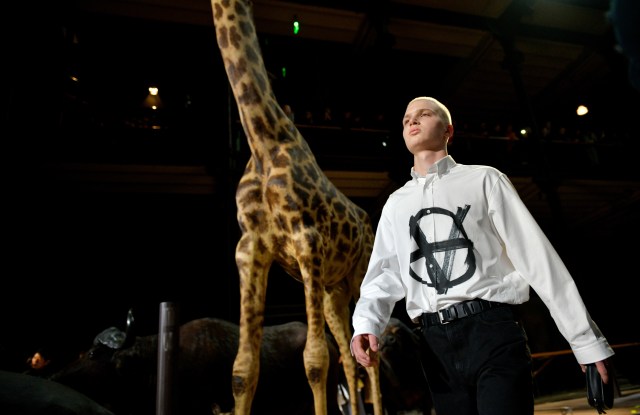 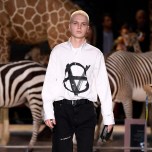 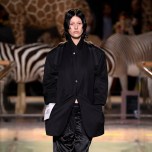 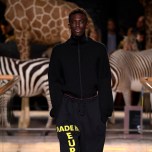 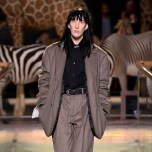 “We ended up realizing that the geeks have become the new punks by inventing the smartphone, something that changed the whole world,” said Demna Gvasalia, tackling a new subject on the Vetements runway: the Internet, especially the Darknet. That includes “all the crazy, scary things that we can acquire there or use in the backstage of what we know as the Internet. How far can it go?”

It came through partly in the graphic work and slogans on hoodies and T-shirts that Gvasalia has been using since the start of the label. He used the T-shirt — “a product that is part of the fashion vocabulary, like it or not,” he reasoned — as a sounding board for what he and members of his team have on their minds and how they see the world. Slogans ranged from “I survived swine flu, now I’m vegan” to “Made in Europe,” with as one of the key graphics a president-themed stamp. Backpacks were decorated with scary faces, complete with creepy floor-sweeping trails of hair, while shrugs were made from disemboweled teddy bears.

And it was. Clotheswise, there was no real design news. As men’s takes a cleaner, more luxurious turn, Gvasalia stuck to his thing: punk-grunge garb with a rebellious teenager streak; updates on Eastern European-peasant dresses and frumpy oversized tailoring; a banal black nylon jacket with Interpol written on it; a bright pink ultratight jumpsuit recalling the brand’s recent hook-up with Juicy Couture, and a guy in a dress made from a patchwork of black T-shirts.

Outerwear went from hooded fake furs sprayed with “ban the bomb” symbols to quilted technical parkas with contrasting patch pockets and a giant stand-up collar, which looked new for the brand, even if a tad familiar.

The “antisocial group” at the end, with hoods extending into opaque veils under which the models navigated the runway using their phone lights, was his “practical solution” to the new “Big Brother” world we live in.

“Traveling to Zurich often by train, I realized that in public places it’s hard to be private now. I can’t even do research for my job. So I came up with this idea, maybe I should have a zippable something so I can actually be alone,” said the designer.

“Masks and hoods help us to hide our identity and say what we think, whether it’s a command on Instagram or a protest at the Arc de Triomphe in Paris,” added the designer, who said he started working on the collection, including the safety-vest style track top, before the gilets jaunes movement kicked off in france.

Sobriety, too, “has probably made me less social,” he said.

The idea for the setting, Paris’ Natural History Museum, with stuffed hyenas, elephants and hippos looking on, came to Gvasalia one Saturday night at home eating pizza and watching “Night at the Museum.”

“Finding locations for independent brands is a big pain in the ass,” he said. “It’s also the perfect kind of collection to show in this place, full of dinosaurs and stuffed giraffes — I hate all that kind of stuff, actually. For me the main theme, the Internet, is the next step in that evolution, it belongs here, conceptually speaking. And to be honest, it was the only option.”