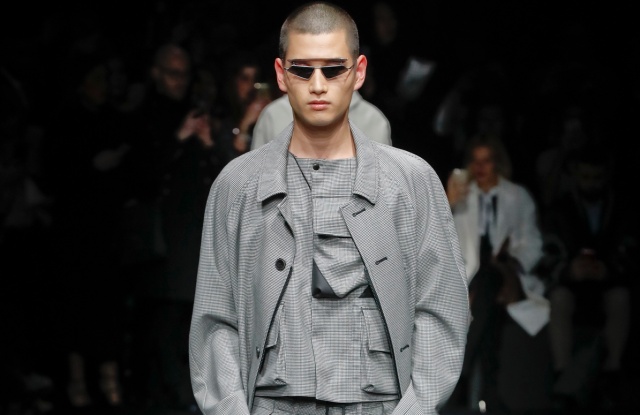 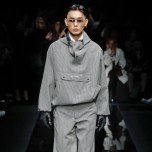 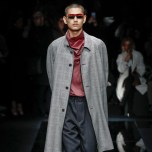 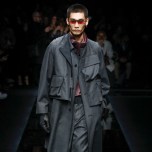 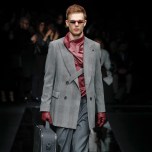 Giorgio Armani whipped out his magnifying glass and hovered it over the classics, blowing up checks, glen plaids, herringbones and chevrons for a collection that fused old-fashioned tailoring with sporty staples.

Inspired by old newspaper clippings and “grandfatherly” clothes, Armani could have created a lineup of signature soft suits in all of those classic fabrics. Instead, he fiddled with patterns and proportions, and fused classic weaves and patterns with sporty fare for one of his sharpest Emporio collections yet.

Long puffer coats came in quilted chevron, while the designer gave parkas a sophisticated spin, doing them in red and black wool check. He broke apart classic tailored suits, pairing the trousers — in magnified houndstooth, herringbone or gray tweed — with fuzzy angora sweaters or tucking them into tall puffer boots.

Armani was looking to appeal to young men, “who are having fun with sporty looks, and who wouldn’t think twice about wearing a ski jacket in the city.” Hence, his playful mix of gritty and interesting and fun urban and great outdoors: Chunky-soled hiking boots worn with tailored suits and cuffed trousers, and long black puffers with a dusting of rainbow spray paint.

His beaded tailored jackets and silvery evening suits were a bit much, though — and too flashy even for Tinseltown. Armani was the first major European designer to dress Hollywood’s leading men, and he knows better than anyone that subtle always trump sparkle.

The show didn’t end there: Instead of a grand finale with models striding around in hiking or puffer boots, Armani showed off a sporty EA7 capsule full of outerwear — ponchos, knitwear and puffers — made from recycled fabrics, and the slogan: “I’m Saying Yes to Recycling.”

“It’s my ad for Planet Earth,” said the designer who — like so many other brands — has been shifting his sustainability efforts into high gear.