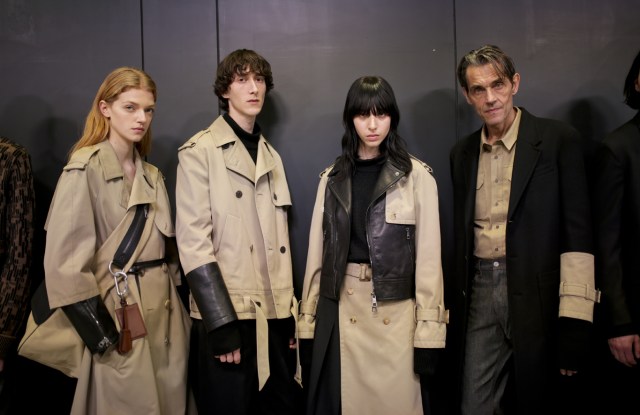 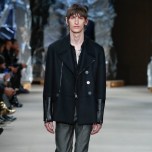 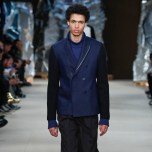 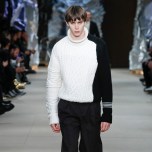 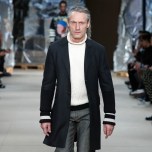 It was a portrait of the artist as a young man — and a mature one, too — with Neil Barrett out to prove that his clothes can work on all genders and generations.

“That’s my mind-set — these clothes can be worn by my nephews, and by me. They’re universal. It’s a question of taste, not of age,” said the designer, who filled this sophisticated collection with hybrids of every sort.

Loden-style or herringbone coats came with waterproof knitted sleeves, while a navy blue cashmere one was toughened up with zips and black leather patches.

In this coed show, Barrett married puffers with tailored jackets, spliced trench coats with leather jackets, and soft pleats with stiff denim for women’s skirts. Who says you can’t have it all?

Barrett said he took the artist as inspiration, looking at how he would dress, create and evolve over the years. He even enlisted the Milan-based graffiti artist Red. Not only did Red walk the show, but he created the Girl with a Pearl Earring T-shirt and the colorful, graphic patterns on knits.

The printed blue silk bathrobe, which was layered under a dark coat, drew from Julian Schnabel’s penchant for pajama dressing, while the naïf-looking prints placed here and there on gray wool coats, suits and denim hybrid jackets were inspired by Berber carpet patterns.

Even the simple looks were eye-catching: The teddy bear shearlings, the pleat-front trousers in classic fabrics like herringbone, the zipless hoodie puffer coats and the comically oversize messenger bags.

Aging may be a fact of life, but it certainly has no part in Barrett’s closet.