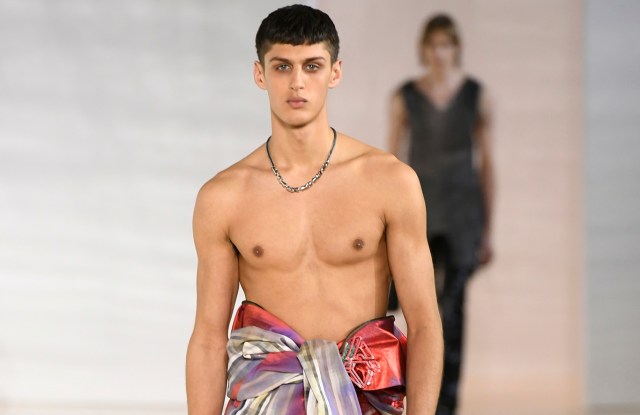 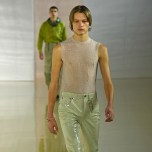 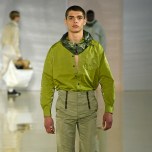 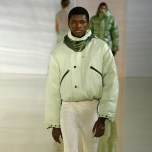 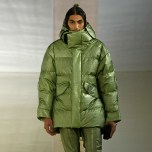 For anyone concerned about the growing influence of big data on fashion design: it gets worse.

For his Acne Studios men’s show, Johnny Johansson tapped artist Robbie Barrat to help create the collection using artificial intelligence. “He programmed his computer with all our old men’s wear pictures,” he explained, standing in front of a mood board full of shadowy, amorphous figures.

Initially, the designer expected to just copy the algorithm’s suggestions. He rapidly realized the impressionistic designs didn’t solve the problem of selecting fabrics and cuts, so his team set about translating Barrat’s work using traditional methods. Still, you could sense the interference on the runway.

Liquid fabrics mirrored the shifting silhouettes of Barrat’s neural networks, programmed not to learn by the correct rules. Garments twisted around the body, or assumed unexpected proportions, as in a quilted eau de Nil shirt worn with gray pants and a padded stole wrapped around the hips.

Several jackets and coats had a curved cutaway at the front — the result of the program interpreting images of open jackets and coats. Sweaters unspooled, while a snake-printed coat morphed with a matching overshirt. Like a man-machine hybrid, a brawny model wore his red metallic jumpsuit pulled down around his waist.

Johansson believes AI could revolutionize fashion design, just as streaming did the music industry. “I’m just feeling that this is going to take over — it sounds scary — but take over in a good way. We haven’t gone that far, I think, but this has been a tool for us this time,” Johansson said. “I used it with pleasure.”

At a time of rampant revivalism, you often hear that nothing is new, everything has been done before. This show suggested new shapes are ripe for exploring. Perhaps we just needed a machine to see them.