Pieces walked the difficult line between conceptual and commercial. 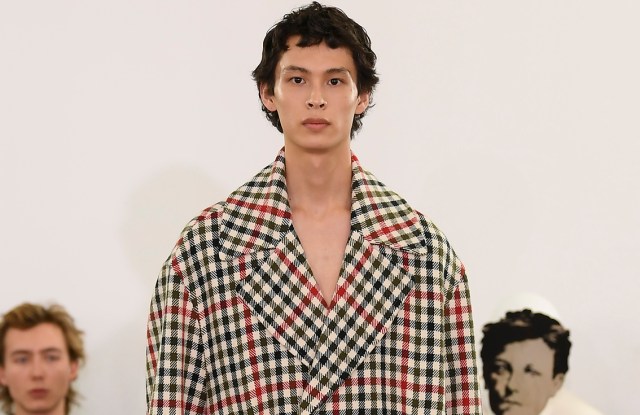 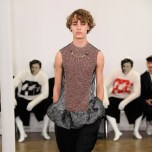 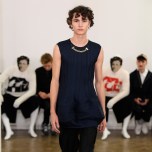 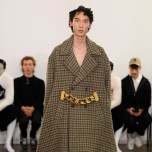 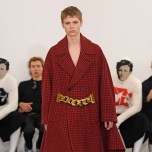 Heritage wool fabrics and weaves — checks, houndstooth and herringbone — have been washing over the fall runways as designers chart a new course for men’s wear and steer away from street.

The designers have been making these fabrics their own, magnifying and shrinking patterns and tailoring them in softer, looser ways for a laid-back feel. The Paris men’s shows have only just begun, and already this city has picked up the torch passed from London and Milan.

Jonathan Anderson was right in there, working with British mills and making great double-breasted cape coats in patterned wool, all with fat gold chains slung across the front. His dramatic camel coat had a sweeping, built-in scarf and even tote bags were made from wool, with the JW anchor logo.

Some of his models looked like medieval monks swathed in acres of warming fabric, while others, dressed in sleek trenches with double lapels and hems, could have stepped straight into the gritty streets of a film noir. Knits did double-duty, too, as in two-tone, two-piece sweaters – including a beautiful one in green and gray – bolted together around the shoulders with fat pearls.

Anderson’s muse this season was David Wojnarowicz, the artist, filmmaker and photographer who took a series of pictures in the late Seventies called “Rimbaud in New York,” showing a man wearing a paper mask of the 19th-century French poet Arthur Rimbaud.

At the show, groups of white mannequins sat front row, wearing pieces from the collection and Rimbaud masks, while the invitation bore the face of the stylish, bad-boy poet. Anderson said he was interested this season in “classicism,” creating a product that was “substantial” and working on solutions to a man’s wardrobe.

There were good ideas there, and Anderson’s pieces managed to walk the difficult line between conceptual and commercial. But in the end, the designer left us wanting.

There were no great breath-catching moments — as there so often are in a typical, lavish JW show. Somehow the lineup felt abbreviated and incomplete, with a few more stanzas needed to complete this promising poem.