Rhuigi Villaseñor muddled his show message with a call for environmental action — but the clothes were just fine. 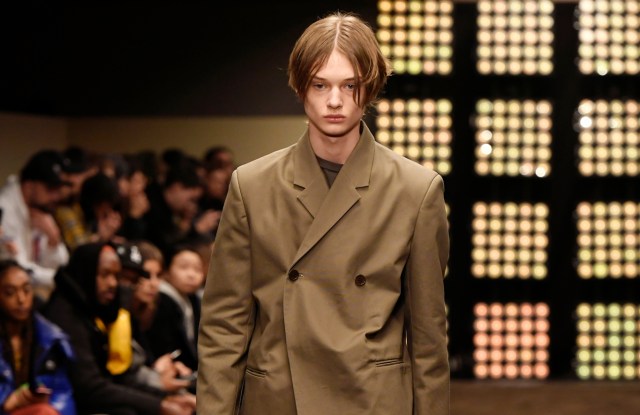 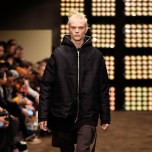 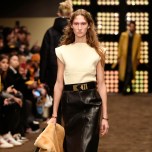 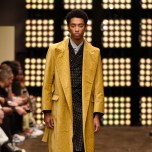 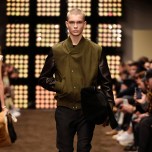 For his first catwalk show on the official calendar in Paris, Rhuigi Villaseñor played to a packed house at the Elysée Montmartre concert hall, where guests including Miguel, Tyga, DJ Mustard and Bryson Tiller sat around a sand-covered catwalk inspired by a sumo wrestling ring.

Villaseñor dedicated the coed Rhude show, titled “Spirit of Ecstasy,” to his late grandfather, and opened it with a voiceover calling for environmental action, and a live performance by two taiko drummers. Though his show notes touched on Japanese samurai and festival culture, there was little trace of either in the show.

The men’s looks toggled between soft tailoring — think suits with protruding long pockets, or a belted robe coat — and sportswear staples with a twist: drop-crotched cargo pants, an asymmetrically buttoned olive varsity jacket, or a blue sweatshirt with off-kilter proportions.

The women’s outfits, meanwhile, ran the gamut from a chic black leather midi skirt to an oversize boiler suit. “I challenged the idea of luxury: what that is to the new kid, and what it is to the old tradition, and how I can meet that in the middle,” Villaseñor explained backstage.

The Los Angeles-based designer was less convincing on the sustainability angle, confessing that he didn’t know the source of the audio clip that opened the show, and that no sustainable fabrics were used in the making of the clothes.

“If it’s about sustainability, we’re making clothes that are timeless. These are necessary garments that will live throughout ages and trends,” Villaseñor said.

He had a point, to a degree. A luxurious tapestry coat (for him) and fur coat (for her) were classic investment buys. But why add climate change to an already muddled narrative? With wildfires raging across Australia, jumping on the environmental bandwagon had better be backed by real action.

“What’s most important is that my message is understood,” said Villaseñor, without apparent irony. It’s easy to see why celebrities have flocked to his seductive aesthetic, but now that he has a bigger platform, he needs to walk the walk.