In a season rife with fresh takes on the suit, Piccioli made a strong case for flower power. 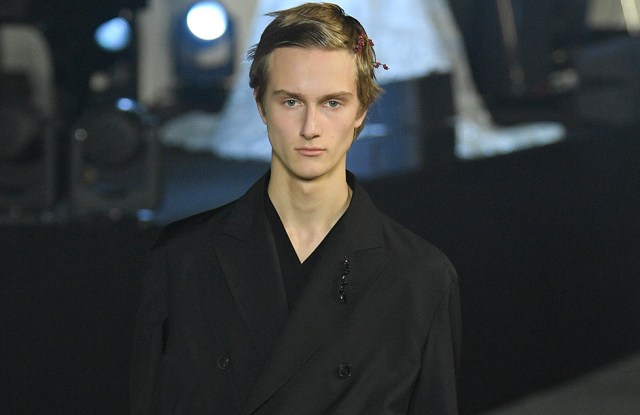 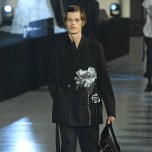 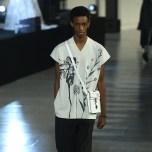 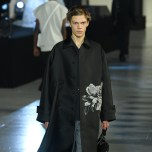 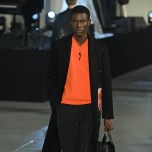 Short of wearing your heart on your sleeve, a flower will also do the trick. There was romance in the air at the Valentino show, where Pierpaolo Piccioli scattered oversize blooms on his softly tailored silhouettes, as FKA Twigs belted her heart out on a small stage.

The floral motifs were drawn from the photo archives of Inez van Lamsweerde and Vinoodh Matadin, and worked in a variety of techniques: tone-on-tone embroidery on a gray grandfather coat; colorful brocade on a khaki wool-and-silk parka, or 3-D appliqué on a camel coat.

Black-and-white blossoms sprouted on a black coat and suit, both slit up the side for ease of movement, the coat dangling a long eyelet belt. It was part of Piccioli’s fresh take on tailoring for a generation reared on streetwear.

“It’s a reflection about men and the idea of romanticism for men today,” he explained during a preview. “Romanticism is about personal expression.” It’s also about embracing your feminine side, the show suggested, as FKA Twigs launched into her feminist homage to Mary Magdalene.

While casual clothes make up the bulk of the men’s business at Valentino, Piccioli thinks there’s room for a more sophisticated aesthetic — not just for the office or special occasions. “I feel that tailoring can be different: more sensitive, less uniform,” he said.

A case in point: his collaboration with artist Mélanie Matranga, whose works featuring oversize lettering provided the slogans plastered across shirts, jackets and coats. “Bad Lover,” proclaimed the ghostly faded letters on a brushed denim jacket. “Need Need,” spelled out the white sequins on a crisp white shirt.

Piccioli brought a similarly playful approach to outerwear, bonding fake leather jackets with brightly colored bouclé wool that lent the surface a knobbly texture. Not all his experiments were successful: a bulky anorak, made from a patchwork of technical fabrics and tailoring wools, was neither fish nor fowl.

Not that it really mattered: after years of catwalk dominance, the sportswear was the subplot of the show. Instead, the spotlight was squarely on dressing up. In a season rife with fresh takes on the suit, Piccioli made a strong case for flower power.