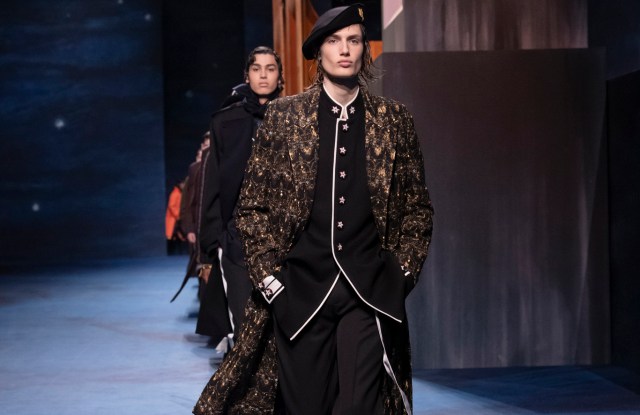 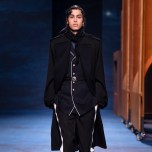 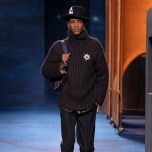 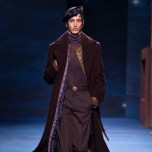 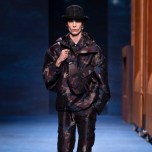 Almost three years into the tenure of Kim Jones as artistic director of men’s collections at Dior, his shows tend to follow a well-rehearsed pattern: a couple of days before the runway event — or more likely in these pandemic times, the digital reveal — the brand posts a teaser revealing the identity of the artist who has collaborated on the collection.

The lineup generally features a mix of utilitarian clothes and extravagantly embellished pieces inspired by Dior’s haute couture legacy, including painstaking renderings of the artist’s work. So it was with the French luxury house’s fall collection, which was developed in close cooperation with Peter Doig.

The painter, who lives and works between Trinidad and London, is known for unsettling landscapes that blend reality, memories, found images and references to art history. Though highly sought after by collectors, his work lacks the pop culture currency of some of Dior’s previous collaborators, such as Kaws and Kenny Scharf.

As a result, this was a more mature, pensive outing for Jones, who lost his father to cancer during lockdown.

Uniforms were a central theme of the collection — a reference to the designer’s graduate collection at London’s Central Saint Martins school in 2002, and also a nod to “Guest House,” Doig’s gray aquatint from the same year, which features the shadowy outline of a soldier in ceremonial garb. The etching was painstakingly reproduced on a jacquard coat, each yarn producing a microscopic dot of color.

The variety of techniques used to render Doig’s work was staggering: a shirt was made using threads that were printed before weaving, producing a blurry image; custom sketches appeared on colorful brushed mohair sweaters, and a detail on a painting provided the pattern for an entire coat.

The collection also drew from the painter’s color palette, with muted blues and browns setting off vivid autumn hues. Jones noted Doig was involved with every step of the collection — down to hand-painting the hats featured in the show, which will be offered for sale to VIP clients. “It was very personal,” he said. “His energy is just amazing.”

The watercolor “Dioroar” references the lions that are a theme of artist Peter Doig’s paintings, and a costume Pierre Cardin had made for his then-boss Christian Dior.  Peter Doig/Courtesy of Dior

It turns out Doig has long-standing links to the fashion world: he studied art at CSM, and his former wife worked for brands including 1980s cult label Bodymap. A new watercolor, “Dioroar,” references both the lions that are a theme of Doig’s paintings, and a costume that Pierre Cardin made for his then-boss Christian Dior to wear to a masked ball.

Speaking of Cardin: the 98-year-old designer was buried this month in the uniform of France’s Académie des Beaux-Arts, having become the only fashion designer named to the prestigious institution. Dior still receives commissions to produce the outfits for inductees, which include a jacket embroidered with olive branches.

“It’s very weird how things are timely,” said Jones, who admired Cardin’s forward-thinking mentality. Jones was also thinking about dressing for the future. “It’s dressing up because of the reaction against the times that we’re living, which is still ongoing, which we didn’t think would still be like this,” he said of his ornate outfits.

The most extreme example of this was his opening look: a black coat covered in a dense gold and rhinestone pattern that required 1,200 hours of embroidery, and was inspired by a Dior couture evening gown designed by Marc Bohan in the 1960s. “Bling Empire,” eat your heart out.

The black Dior Men’s coat covered in a dense gold and rhinestone pattern.  Courtesy of Dior

It sparkled in Dior’s showroom, but was drowned in the online presentation, which featured models walking on a set dotted with giant speakers. Ditto the small details, like the star-embroidered buttons that referenced Christian Dior’s personal lucky charm.

“It’s frustrating for me. People can’t see the full story,” acknowledged Jones, saying he faces the same dilemma for his debut women’s haute couture collection for Fendi next week.

“For me, it’s a question: how can we transfer this information across? But I’m very grateful that we can actually just create a beautiful collection to start because, you know, it’s very tricky time to do anything and obviously, my priority is that everyone’s safe,” he added. “I think that you can see the collection’s very rich in the film, but it’s never the same as seeing it in real.”

That much is true, but it points to an opportunity for change. Let’s hope that once the sanitary shackles are lifted, Jones shakes up the Dior formula with more than fresh artist collaborations.