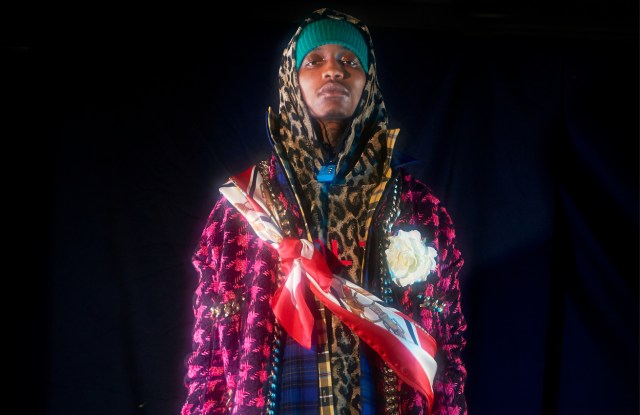 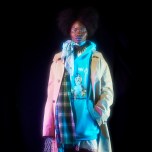 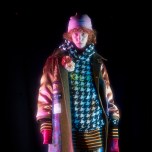 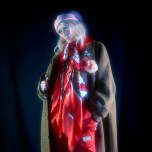 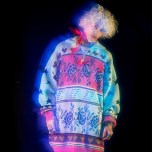 Determined to exist in both the physical and digital worlds despite the current context, Thomas Monet timed his holographic video launch with the introduction of an installation in the window of a store in the Galerie Vivienne, in Paris’ 2nd arrondissement.

Inspired by the Flemish painters and the persona of Oscar Wilde, he injected touches of romanticism into his eclectic esthetic, which blurs grunge and bourgeois influences with streetwear.

This translated into floral prints and lace details, paired, for example, with 1990s-inspired tracksuits, worked in this instance in silk jacquard with floral or chain link motifs. Another example was a checked shirt that was spliced onto a kimono, nodding to the late 19th-century obsession with all things Asian.

Highlights in the coed lineup included a selection of statement reversible outerwear. On the one side, the designs looked to be classic pieces in Harris tweed or houndstooth, albeit in oversize proportions. When reversed, they became patchworks of contrasting fabrics, their shapes usurped thanks to tie or quilting details.

Add to that busy printed body-con, animal motifs, distressed tweeds, stripes and checks in various shapes and sizes, blingy hardware and mismatching buttons, and there was a lot going on in the lineup, designed to be layered at will.

The young label, in its second season on the Paris men’s calendar, seems to be following in the footsteps of brands like Faith Connexion a few seasons ago and opening up that esthetic in a way likely to appeal to a young consumer base.