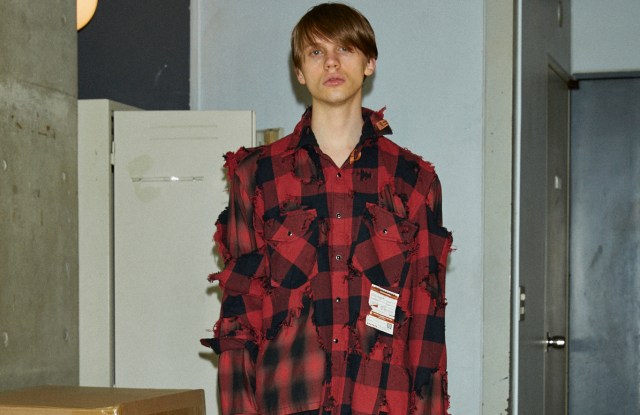 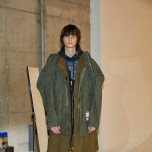 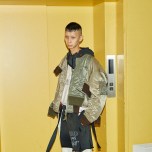 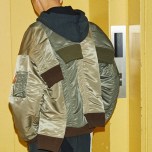 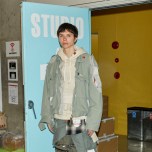 There are contradictions throughout Mihara Yasuhiro’s coed collection for fall, titled “Basic Antinomie,” which took a cue from Immanuel Kant’s antinomies, or contradictions of two beliefs.

“This time, it’s totally opposite,” he explained. “What I’m really interested right now is that the clothing, their patterns, are not perfect. The sewing isn’t exactly finished. There is no harmony there, [but] this mixture of styles.”

At the core of each garment, something is off kilter, he said.

Yasuhiro continued to mix elements and reconstructing pieces of garments, especially denim and other traditional Americana. (Yasuhiro has a soft spot for used clothing, which he collects.)

Sleeves of various military blousons comprise the back of one jacket, while on another two halves of two leather jackets converge. A leather apron overlays a long, checked dress.

Some silhouettes are oversized, with slightly displaced armholes, and certain fabrics are ripped to show contrasting material beneath.

For the collection’s video, Yasuhiro wanted to channel what was in his mind — everyday life’s chaos and how things can change in an instant.

“A man walks into a bar” is how it starts. But it’s no joke. The businessman, played by Yasuhiro’s university friend Takaumi Furuhashi, who also wrote the screenplay and created the animations, is about to sing karaoke when the screen gets full of cool kids wearing Maison Mihara Yasuhiro’s fall collection.

They’re kicking up some comic strip “Pows!” and “Blams!” and end up in the bar. Virtual and reality merge, like in all of our lives today.