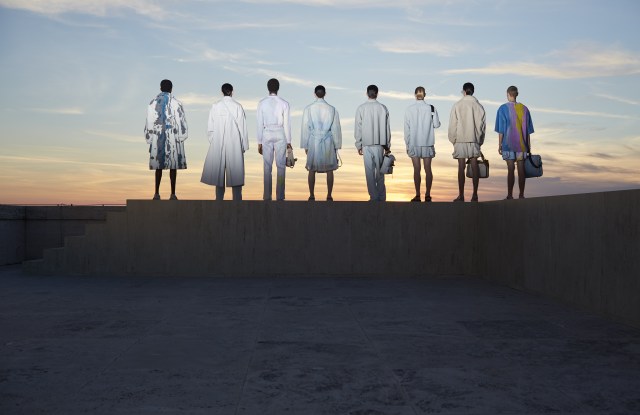 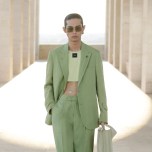 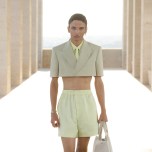 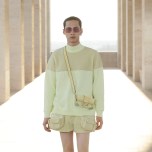 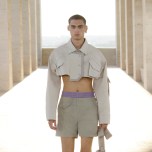 In a world that necessarily got much smaller for all us, Silvia Venturini Fendi found inspiration in her work environment.

“I strongly believe that what is close and familiar can be as much as inspiring as what is far and exotic,” she said during a preview on the set of the short movie by artist Nico Vascellari that portrays the Fendi’s men’s spring 2022 collection.

Palazzo Della Civiltà Italiana, that houses Fendi’s headquarters in Rome, served as the grand set for the video. It also offered Venturini Fendi the privileged point of observation on the Eternal City that deeply influenced the creation of her latest collection.

Looking at her native city from the top of the palazzo, one of the tallest buildings in Rome, she started thinking about proportions and perspectives, that, along with a study of the changing colors of the Roman sky across the different seasons, became the focal points of her beautiful lineup.

While sticking to uncomplicated clothes that reflect the needs of the real life, the designer developed an exciting wardrobe that was luxurious, but also light and playful.

A sense of adventure and exploration, combined with practical functionality, informed the lightweight, precise outerwear, the suede over shirts and the short pants featuring multiple patch pockets. Trenches dabbed with leather and jacquard denim jackets were roomy, while Fendi’s new, fun suit for the season featured pants and shorts with elastic waistbands matched with cropped double-breasted boxy jackets. They added a touch of fun and fashion frivolity to the collection, as did the adorable accessories, spanning from bags cut in the shape of bucket hats, Plexiglas mini Baguettes, ping-pong rackets case holder and swimming goggles developed in collaboration with specialist Arena.

Putting the accent on her top view, Venturini Fendi also splashed a range of pieces, including a languid silk pajama set, with an archival maps of Rome, and abstract patterns inspired by the views of the globe from space.

The short film depicted the models walking by the arches and on the rooftop of the Palazzo Della Civiltà Italiana hit by the light of the Roman sun at the different hours of the day and ends with the Fendi fashion parade taking over the facade of the palazzo at night. A woman designing for men, Silvia Venturini Fendi gave her clothes a practical romanticism and a graceful attitude.