In his first foray into men's wear, Nicolas Di Felice struck a balance between gender-fluid club gear and workwear-inspired designs. 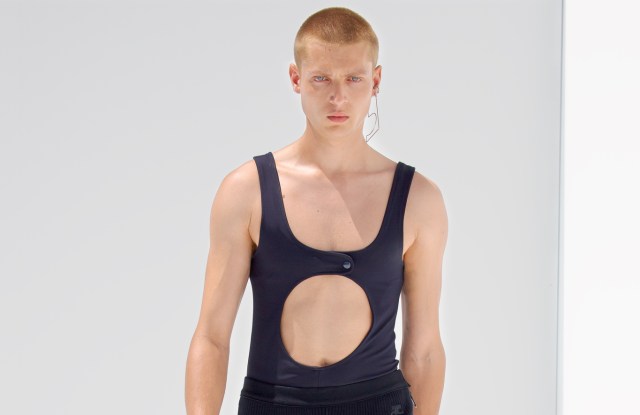 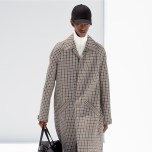 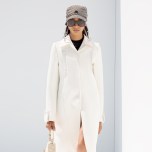 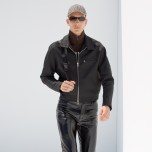 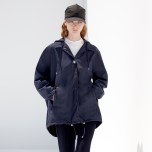 Add Courrèges to the list of brands offering a his-and-hers wardrobe.

For the launch of the house’s first men’s collection in 35 years, artistic director Nicolas Di Felice based many of the looks on his debut women’s collection, unveiled in March. Even the format of the presentation was similar, as models walked in a white box to a soundtrack by Erwan Sene, alongside women dressed in resort looks.

Having spent most of his career working alongside Nicolas Ghesquière, the designer knows how to cut to the chase. Everything about his approach is concise, from the razor-sharp constructions and considered details, to the minimal palette of black, white, navy, brown and beige.

Ditto the messaging: he reprised the oversize checked raincoat with raglan sleeves that opened his last show — a look inspired by a photograph of founder André Courrèges. “He was the best advertisement for the men’s line, since he was always dressed in his own designs,” he remarked.

But where the Space Age designer channeled a sporty attitude, Di Felice skews toward club culture. Vinyl tank tops and rib knit pants, a stretch jersey top with a circular cutout midriff and black leather pants with openwork side seams were better suited for the dance floor than a walk in the park.

“I’m inspired as much by the archives of the house as by what I see after hours, and by the freedom of this generation that is more daring,” said the designer, noting it was his first time tackling men’s wear.

Hence, when thinking up a little black jacket for Courrèges, he made it unisex: a ’60s-inspired boxy cropped style with three pockets. He noted that men have already adopted the label’s signature vinyl jackets, part of a range of reedited house icons introduced last year — so gender-fluid designs came naturally.

It flows the other way, too: his women are just as likely to borrow an oversize shirt, or a navy workwear-style jacket and pants, inspired by the Sta-Prest styles of the ’60s. The approach felt in tune not just with the brand’s history of creating a holistic universe for women and men, but also with the cultural moment.

Di Felice’s debut designs have been a hit with celebrities including Ariana Grande, Dua Lipa and Hailey Bieber, who raised eyebrows by wearing a dress with a cutout midriff by LaQuan Smith to meet French President Emmanuel Macron in Paris this week. Next time, her husband, Justin Bieber, might be the one flashing his abs.