Thom Browne did away with some of the more severe silhouettes he typically favors. 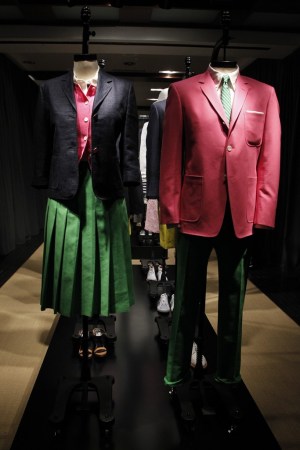 In a word, preppy. For spring, Thom Browne did away with some of the more severe silhouettes he typically favors and instead showed the kind of clothes his bosses at Brooks Brothers are well-versed in. For women, Browne honed in on bright pink, green and yellow designs with a Sixties touch, which is a departure for the label. He also put together contrasting seersuckers, and added details such as three pockets on a lace dress. His men, meanwhile, will be just as ready for a weekend at the country club, i.e. a cotton pique sack suit with a bright pink blazer and green pants. Browne’s uberprep moment doesn’t mean he turned his back entirely on some of his earlier designs. Black Fleece’s hallmark red, white and blue blazer was still there, this time in a silk rep tie fabric.